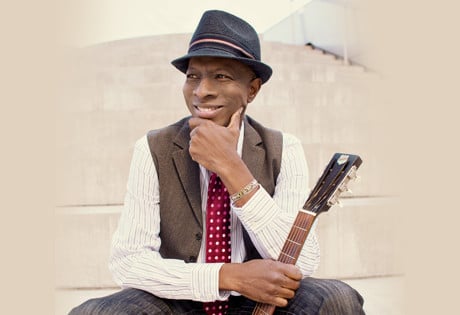 Look no further than WeddingEntertainment.com! We make it easy and stress-free to check availability and pricing for booking Keb Mo or any other act in the business. With over 26 years of experience in the industry, we have booked and produced thousands of events for clients worldwide.

Keb’ Mo’ was born in 1952 and developed an early appreciation for gospel and blues when he was growing up. He started playing guitar in a calypso band as a teenager, and throughout the 1970’s and 1980’s Keb’ Mo’ performed with a number of backup bands for other musicians. A collaboration with Papa John Creach led to his first steady gig when Keb’ Mo’ was only 21, and his music can be heard on four of Jefferson Airplane’s albums.  Keb’ Mo’ also began work as a writer around this time, and he continued to perfect his craft for the next two decades, until in the early 1990’s Keb’ Mo’ began pursuit of a solo career.

In addition to his musical performances, Keb’ Mo’ has also been seeing playing the characters Robert Johnson (in the film Can’t You Hear the Wind Howl, 1998); the Angel of Music (in episodes of Touched by an Angel, 1997); and Possum (in the film Honeydripper, 2007.) A three-time Grammy Award winner, Keb’ Mo’ continues to write and perform, both as a solo artist and in collaboration, with plans for future projects on the horizon.