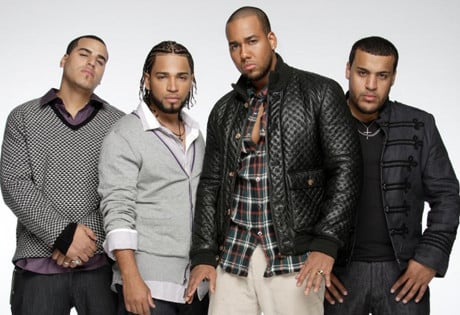 Looking to book Aventura entertainment for a wedding anywhere worldwide?

WeddingEntertainment.com makes it easy and trouble-free to check availability and pricing for booking Aventura or any act in the business for your wedding. If we don't book an act for you, our service is free. For over 26 years we have booked and produced thousands of events for our clients worldwide. We can also handle everything necessary to produce the show for one all-inclusive price so there are no surprises. Simply fill out an entertainment request form and a booking agent will contact you to discuss the possibility of booking entertainment for your wedding.

Aventura came together when members Henry Santos, Anthony “ Romeo” Santos, Lenny Santos, Max Santos, and Toby Love formed the bachata group in the mid 1990’s. The group members were extraordinarily young, but had fallen in love with the unique sound, derived from the guitar-based Dominican folkloric music, at an early age.  By the time they were teenagers they were ready to embark on music careers, and they created a brand of the music which blended hip hop, R&B and urban sounds.

Their first album, Trampa de Amor, was released in 1995, but their breakthrough came with the single “Obsession,” which exploded onto the charts in 2002, launching the New York-based group to superstardom. The single dominated the charts not only in the United States, but also especially in Europe, where it hit number one in Italy. The album We Broke the Rules also landed at number one in Holland, Belgium, Spain, Greece, Austria, Romania, Slovenia, Germany and France. The album God’s Project followed in 2005, and then Kings of Bachata in 2006, both reaching in to the charts and launching a series of successful tours for Aventura.

In 2007, Aventura performed to a sell-out crowd at Madison Square Garden and shortly thereafter released the DVD version of the performance to unprecedented sales.  They repeated their success at the same venue in the following year, alongside Alejandro Fernandez and Marc Anthony, and then launched a tour with Enrique Iglesias. By 2009, Aventura was ready to release The Last, which debuted at number one on the Latin charts and number five on the Billboard 200.

Although Aventura disbanded in 2011, they remain a critically acclaimed group with multiple award recognitions, including Album of the Year and Song of the Year from Premium Io Nuestro and the Billboard Awards, and Voice of the Moment, Favorite Concert, and Best Tropical Artist from Premio la Juventud.  Romeo and Henry Santos have each gone on to enjoy solo careers, and Lenny and Max Santos joined Steve Styles from Xtreme to create the group Vena.