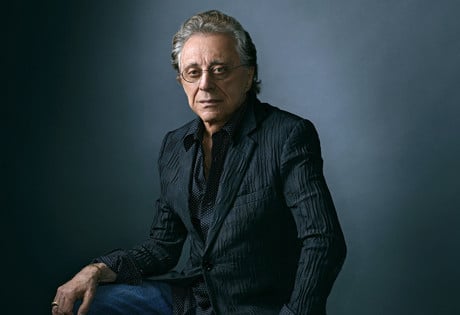 WeddingEntertainment.com makes it easy and trouble-free to check availability and pricing for booking Frankie Valli or any act in the business for your wedding. If we don't book an act for you, our service is free. For over 26 years we have booked and produced thousands of events for our clients worldwide. We can also handle everything necessary to produce the show for one all-inclusive price so there are no surprises. Simply fill out an entertainment request form and a booking agent will contact you to discuss the possibility of booking entertainment for your wedding.

One of the very biggest rock & roll groups of the 1960s, Frankie Valli and The Four Seasons is most recognized by the unique falsetto vocals of their lead singer, Frankie Valli himself.  Their intricate harmonies, Italian-American doo-wop styles, and R&B influence led to a stellar career and iconic collection of hits for the decade.

Frankie Valli & The Four Seasons hit the Top 10 thirteen times, with hits like “Big Girls Don’t cry,” “Rag Doll,” Let’s Hang On,” and “Sherry,” between 1962 and 1967. Although Frankie Valli had experienced some solo success in 1956 with “Apple of my Eye,” it wasn’t until Bob Crewe, a Philadelphia producer, began working with Frankie Valli and The Four Seasons in 1962 that the biggest hits of the 1960’s were produced for the band. The group embarked on a more sophisticated and dramatic production in 1964, and that year they had some of their biggest hits. "Rag Doll," "Save It for Me," "Dawn," "Ronnie," and "Big Man in Town" were all notable achievements that year. Singles like "Working My Way Back to You," “Let’s Hang On,” "Opus 17," "Marianne," "I've Got You Under My Skin," and "Beggin',” were also all hits. Frankie Valli also launched a solo career in the late 60’s with his number two single, “Can’t Take My Eyes Off You,” although The Four Seasons briefly returned to the charts in the 70’s with “Who Loves You.”

Today, Frankie Valli and the Four Seasons continue to perform and record. The popularity of the Broadway musical Jersey Boys, inspired by the true story of the group’s rise to fame, has helped tremendously in the recent resurgence of popularity for the group. The group recently released the album ‘Tis the Seasons (2016) and spent most of 2016 through 2017 touring the United States, performing at venues in Nevada, Arizona, Pennsylvania, and many other states. In total so far, Frankie Valli and The Four Seasons have sold 175 million records worldwide and are one of the best-selling vocal groups in history.