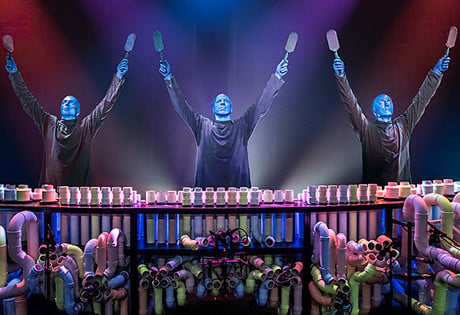 Look no further than WeddingEntertainment.com! We make it easy and stress-free to check availability and pricing for booking Blue Man Group or any other act in the business. With over 26 years of experience in the industry, we have booked and produced thousands of events for clients worldwide.

Blue Man Group, founded by Matt Goldman, Chris Wink, and Phil Stanton, is best known for its performances featuring insightful humor and multi-sensory experiences conveyed through the antics of three mysterious, bald, blue men. Without a doubt, a Blue Man Group performance is one like no other. The group itself, however, is actually an organization created by the founders not only for theatrical shows, but also for film and television music and a children’s museum exhibit (called “Making Waves.”)

Matt Goldman and Chris Wink became friends while still attending public school in New York City.  They remained in touch and reunited in Manhattan after finishing college (Clark University and Wesleyan University), and began their endeavors as the Blue Man Group, performing around the city in a variety of venues.

They had yet to create a full-length show, however, until the artistic director of The CLUB @ La MaMa viewed a performance and commissioned them for one. Tubes became the Blue Man Group’s first official show, and it was so well received and critically acclaimed they moved the show to off-Broadway. The quirky qualities of the show and its blue men, always in character (including autographs granted only with a smudge of blue paint) has helped to maintain the mystique of the show and the performers ever since.

Audio was the first recording released by Blue Man Group in 1999, and since then, Blue Man Group has continued to release albums periodically. The Complex followed in 2003, and includes vocals by notable performers such as Dave Matthews and Venus Hum.

Blue Man Group began touring extensively in the new millennium, starting with performances alongside Moby in 2002. Their first headlining tour was in 2003, in support of The Complex, and the How to Be a Megastar Tour 2.0 in 2006 followed, taking them to worldwide locations in Europe and Taiwan. They expanded their horizons even further in 2010, when Blue Man Group began performing nightly shows aboard the Norwegian EPIC.