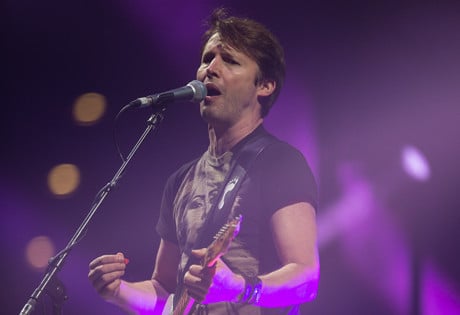 WeddingEntertainment.com makes it easy and trouble-free to check availability and pricing for booking James Blunt or any act in the business for your wedding. If we don't book an act for you, our service is free. For over 26 years we have booked and produced thousands of events for our clients worldwide. We can also handle everything necessary to produce the show for one all-inclusive price so there are no surprises. Simply fill out an entertainment request form and a booking agent will contact you to discuss the possibility of booking entertainment for your wedding.

James Blunt was born in 1974 in England, into a military family, which gave him the opportunity to live in Germany and Cyprus as a child. He studied violin, piano, and guitar as a child, and by the time he entered his early teens, he had begun writing his own songs. He went on to study aerospace engineering at the University of Bristol, but shifted his focus of study to sociology, and then after graduating, he began work on his music demos.

After viewing a James Blunt performance at the South by Southwest Music Festival, Linda Perry of Custard Records offered Blunt a contract, and he began work on his debut album. Back to Bedlam was released in 2004, featuring the songs “High,” “Wisemen,” and “You’re Beautiful,” which eventually became his breakout hit. The single reached into the Top Ten on both the Adult Contemporary and Adult Album Alternative charts. In addition, eight of album’s singles were featured on a variety of television shows, films, and ads, including Grey’s Anatomy, Undiscovered, and Sprint. “You’re Beautiful” was performed by James Blunt at the 2007 Grammy Awards, and the album eventually went on to sell eleven million copies and became the best selling album of the decade (2000s) in the UK.

James Blunt followed up with All the Lost Souls in 2007, featuring the singles “1973,” “Same Mistake,” “Carry You Home,” and “I Really Want You.”  By the end of its first year of release, the album had sold 4.5 million copies worldwide. Some Kind of Trouble followed in 2010, featuring “Stay the Night,” “So Far Gone,” and “If Time Is All I Have.”

James Blunt is an active supporter of a number of charities, including Doctors Without Borders and a variety of environmental causes. The trailer for An Inconvenient Truth was included at many of his concerts, and he performed at the Live Earth Concert in London in 2007. Blunt also sang for the Haiti Earthquake relief effort, “Everybody Hurts,” and contributes to Help for Heroes, which assists wounded servicemen.