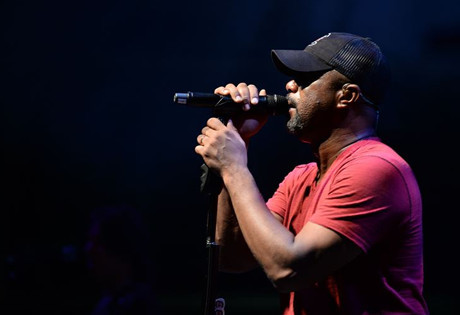 WeddingEntertainment.com makes it easy and trouble-free to check availability and pricing for booking Darius Rucker or any act in the business for your wedding. If we don't book an act for you, our service is free. For over 26 years we have booked and produced thousands of events for our clients worldwide. We can also handle everything necessary to produce the show for one all-inclusive price so there are no surprises. Simply fill out an entertainment request form and a booking agent will contact you to discuss the possibility of booking entertainment for your wedding.

Darius Rucker was born in 1966 and raised in Charleston, South Carolina. He developed a love of R&B at an early age, listening to the likes of Al Green and Otis Redding, and their influences remained with him through the establishment of Hootie & the Blowfish, the band for which he served as frontman. With hits like “Hold My Hand,” Only Wanna Be With You,” “Time,” and “Let Her Cry,” Darius and Hootie & the Blowfish dominated the charts for the early 1990’s.

With Hootie & the Blowfish, Darius Rucker earned six chart-topping hits and released five studio albums, the last of which was Musical Chairs in 1998. Immediately after, the band took a break, and Darius Rucker embarked on a solo career. His first attempt was 2002’s Back to Then, but it was his sophomore attempt, Learn to Live, which would bring him a hit single with “Don’t Think I Don’t Know About It.” The song hit number one on the country charts, and was followed by additional hits, “Alright,” It Won’t Be Long,” and “History in the Making.” The album ultimately certified platinum, and brought Rucker some interesting distinctions, including becoming the first African American to win the Country Music Association’s New Artist Award.

Since that time, Darius Rucker has released the additional albums Charleston, SC 1966 (2010), True Believers (2013), and Southern Style (2015), featuring the singles: “Come Back Song,” “This,” “I Got Nothin,” “Homegrown Honey,” and a cover of the song “Wagon Wheel” which earned a Grammy Award for Best Country Solo Performance. Most recently, Darius Rucker released the album When Was the Last Time (2017), featuring the singles “If I Told You” and “For the First Time.” Rucker most recently was nominated for a CMT Music Award for Performance of the Year in 2017, for a version of “ Pink Houses” sung with John Mellencamp.