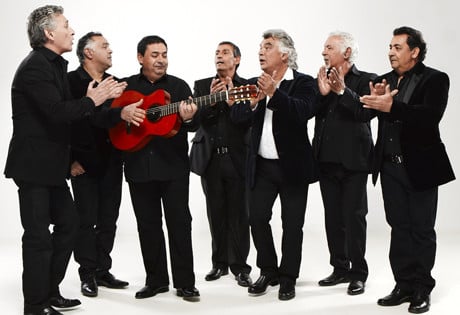 WeddingEntertainment.com makes it easy and trouble-free to check availability and pricing for booking Gipsy Kings or any act in the business for your wedding. If we don't book an act for you, our service is free. For over 26 years we have booked and produced thousands of events for our clients worldwide. We can also handle everything necessary to produce the show for one all-inclusive price so there are no surprises. Simply fill out an entertainment request form and a booking agent will contact you to discuss the possibility of booking entertainment for your wedding.

The group known as the Gipsy Kings was created in the south of France, founded by brothers Andre and Nicolas Reyes. All members of the group are of Spanish/Romani descent, and for more than two decades now the Gipsy Kings have been bringing audiences a unique style of “rumba catalana,” known for its rich Spanish, flamenco flavor. The Reyes brothers were largely influenced by their father, a well-respected flamenco artist, and after spending a few years performing as Los Reyes initially, in the mid 1980’s, they established the Gipsy Kings and released their debut album in 1989.

The Gipsy Kings continue to perform and record together with the current lineup of Nicolas, Andre, Paul, Francois and Patchai Reyes; and Tonino, Paco, and Diego Baliardo. Their most recent release is the album Savor Flamenco (2013), although many of the individual members of Gipsy Kings have also released solo projects, including Bolero (from Canut Reyes, in 1988) and Essences (from Tonino Baliardo in 2001.)