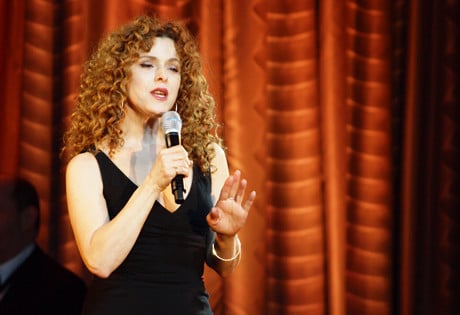 WeddingEntertainment.com makes it easy and trouble-free to check availability and pricing for booking Bernadette Peters or any act in the business for your wedding. If we don't book an act for you, our service is free. For over 26 years we have booked and produced thousands of events for our clients worldwide. We can also handle everything necessary to produce the show for one all-inclusive price so there are no surprises. Simply fill out an entertainment request form and a booking agent will contact you to discuss the possibility of booking entertainment for your wedding.

Bernadette Peters began her career at the tender age of three, with appearances on Name That Tune, Juvenile Jury, The Horn & Hardart Children’s Hour, and This is Goggle.  While still only a teenager, she appeared inThe Most Happy Fella and The Penny Friend, and also performed in Gypsy with a national touring company.

Johnny No-Trump was Bernadette Peter’s Broadway debut in 1967, and two years later she starred in George M!  with Joel Grey. That same year her performance in the off-Broadway Dames at Sea brought Peters a Drama Desk Award, and Song and Dance brought her both a Drama Desk and a Tony Award. An additional nomination for the Sam Mendes’ revival of Gypsy followed.

Bernadette Peters’ mark has been made not only on the stage, but also on the screen. Among the list of Peters’ seventeen films include Pennies From Heaven, The Jerk with Steve Martin, The Longest Yard with Burt Reynolds, Silent Movie with Mel Brooks, Annie with Carol Burnett, Pink Cadillac with Clint Eastwood, Slaves of New York with Mercedes Ruehl, Woody Allen’s Alice with Mia Farrow, Impromptu with Hugh Grant and Mandy Patinkin, and It Runs in the Family, starring opposite Kirk and Michael Douglas.

Bernadette Peters remains an avid supporter of numerous charities, including
Broadway Cares/Equity Fights AIDS, The Gay Men’s Health Crisis, and her own personal mission, Broadway Barks, which she founded with Mary Tyler Moore. The organization hosts an annual dog adoption event, which assists animal shelters throughout the New York area.

Most recently, Bernadette Peters appeared in the film Coming Up Roses (2012) and in the Amazon Studio’s highly acclaimed series Mozart in the Jungle (2014.) As of 2017, Peters appears in a recurring role in the CBS series The Good Fight, while still continue to tour intermittently with An Evening with Bernadette Peters, her highly popular and critically lauded cabaret act.