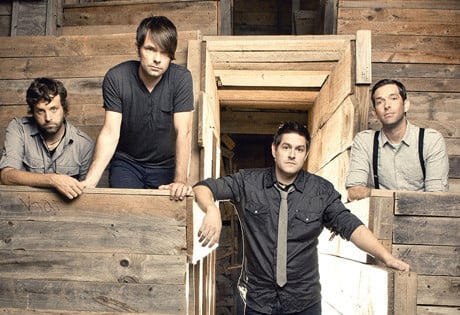 Looking to book Jars Of Clay entertainment for a wedding anywhere worldwide?

WeddingEntertainment.com makes it easy and trouble-free to check availability and pricing for booking Jars Of Clay or any act in the business for your wedding. If we don't book an act for you, our service is free. For over 26 years we have booked and produced thousands of events for our clients worldwide. We can also handle everything necessary to produce the show for one all-inclusive price so there are no surprises. Simply fill out an entertainment request form and a booking agent will contact you to discuss the possibility of booking entertainment for your wedding.

The Christian rock band Jars of Clay rose to prominence in 1995 after the release of their smash-hit “Flood.” The group was established in the early 1990’s in Nashville, Tennessee, by founding members Matthew Odmark, Stephen Mason, Charlie Lowell, and Dan Haseltine. A demo submitted as part of a talent competition brought the band to the attention of Essential Records, which signed them in the early 1990’s.

Shortly thereafter, Jars of Clay released a self-titled debut album and the song “Flood” rose to success on the mainstream charts. Eventually, the song would go on to become one of the most most successful mainstream hits by a Christian band on a Christian label and bring the album to multi-platinum status.

Jars of Clay has earned three Grammy Awards for their first three albums, and multiple GMA Dove Awards. The band continues to perform and record with its current lineup. Jars of Clay most recently released the album Inland, which arrived in 2013.