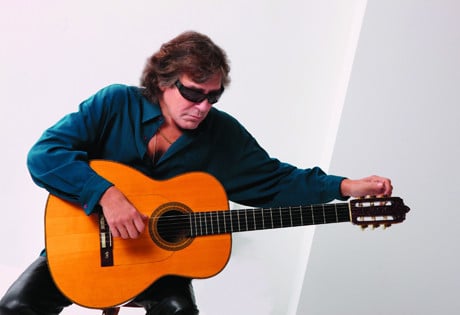 WeddingEntertainment.com makes it easy and trouble-free to check availability and pricing for booking Jose Feliciano or any act in the business for your wedding. If we don't book an act for you, our service is free. For over 26 years we have booked and produced thousands of events for our clients worldwide. We can also handle everything necessary to produce the show for one all-inclusive price so there are no surprises. Simply fill out an entertainment request form and a booking agent will contact you to discuss the possibility of booking entertainment for your wedding.

Jose Feliciano was born in 1945 in Lares, Puerto Rico, into a large family of eleven boys. At the age of five, he moved with his family to New York, where Jose listened to records and used them to learn to play the concertina. Before he was ten years old, he was performing around the neighborhood, for schoolmates and at local theaters. With the same limited means, Jose Feliciano also became a self-taught guitar player as a child, often practicing for the entire day in order to master the instrument. It was in his mid-teens that he also began to explore his own voice.

The family’s poverty forced Jose to quit school at the age of seventeen so that he could help his family financially. With music and performance as his best opportunity for making money, Jose began to play in Greenwich Village coffee houses for tips. An opportunity to perform at the Mar del Plata Festival in Argentina in 1966 eventually led to his breakthrough, when executives from RCA encouraged Jose to remain and record his first album of Spanish music. Without any idea of what to select to include on the album, Jose turned to his childhood memories of old “boleros,” and recorded them for the album.

Jose Feliciano continues to delight his fans with performances, especially those alongside world-famous symphony orchestras such as the Los Angeles Philharmonic and the London Symphony. In 2012, Feliciano performed the Star-Spangled Banner twice, first for the New York Yankees and then after for the St. Louis Cardinals. Most recently, in 2017 Jose Feliciano performed at The Polar Music Festival, singing Sting’s legendary hit song, “Every Breath You Take,” with Sting himself watching from the first row.