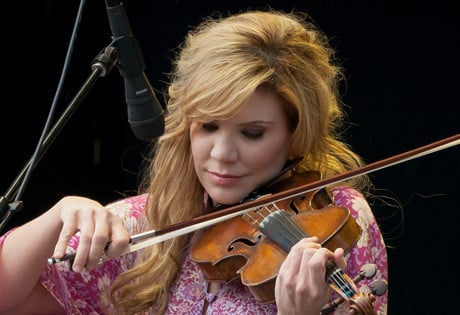 WeddingEntertainment.com makes it easy and trouble-free to check availability and pricing for booking Alison Krauss or any act in the business for your wedding. If we don't book an act for you, our service is free. For over 26 years we have booked and produced thousands of events for our clients worldwide. We can also handle everything necessary to produce the show for one all-inclusive price so there are no surprises. Simply fill out an entertainment request form and a booking agent will contact you to discuss the possibility of booking entertainment for your wedding.

Alison Krauss was born in 1971 in Decatur, Illinois. Alison’s exposure to music began quite early; after studying classical violin when she was only five years old, she switched to country and bluegrass within a few years and by the time she was ten, she’d established her first band. As a fiddler, Krauss won a number of awards when she was still a teenager, and she was only sixteen when her debut album, Too Late to Cry, was released in 1987.

At the same time, Alison Krauss was performing with the group Union Station, and her contract with Rounder Records called for her divided attention to both solo work and work with the band. Union Station’s debut, Two Highways, was released in 1989, and then again in 1990, Alison Krauss released I’ve Got that Old Feeling, her sophomore solo endeavor. The album brought Krauss to the charts and earned her a Grammy for the song “Steel Rails,” bringing her into the mainstream spotlight for the first time.

Krauss’s voice is even more recognizable as part of innumerous film soundtracks, including: Twister; Eight Crazy Nights; The Prince of Egypt; Mona Lisa Smile; Divine Secrets of the Ya-Ya Sisterhood; and the two films for which she is most famous for her contributions, Cold Mountain and O Brother, Where Art Thou?, the latter of which features her heart-stopping, Grammy Award-winning renditions of “Down to the River to Pray” and “I Am a Man of Constant Sorrow.” Alison Krauss also received an Academy Award nomination for the songs “You Will Be My Ain True Love” and “The Scarlet Tide,” featured in the film Cold Mountain.

So far in her career, Alison Krauss has garnered twenty-seven Grammys collectively, making her among the most awarded living recipients. Krauss’s latest album, Windy City, was released in 2017. The album features country and bluegrass classics, and marks Krauss’s first solo album in nearly two decades.