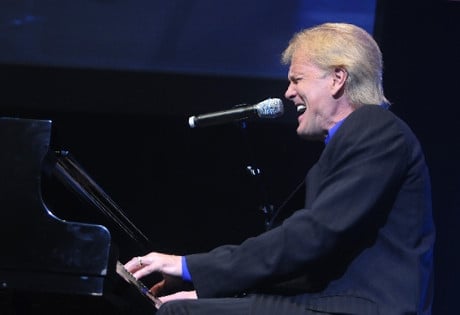 WeddingEntertainment.com makes it easy and trouble-free to check availability and pricing for booking John Tesh or any act in the business for your wedding. If we don't book an act for you, our service is free. For over 26 years we have booked and produced thousands of events for our clients worldwide. We can also handle everything necessary to produce the show for one all-inclusive price so there are no surprises. Simply fill out an entertainment request form and a booking agent will contact you to discuss the possibility of booking entertainment for your wedding.

Musician John Tesh was born in 1952 on Long Island, New York. John showed signs of an early talent when he began playing piano at the age of six. By the time he was a teenager, he was performing locally with rock bands, although after graduating from North Carolina State University, his focus shifted gears and he found himself working in television, progressing all the way up to the anchor position at a CBS affiliate.

By the early 1980’s, John Tesh had earned a series of Emmy Awards for his sports coverage, which led to his position as host of Entertainment Tonight, the gig which would lead to his emergence as a household name. During this time, however, he continued to pursue his love of music, writing and preparing tracks for a debut album.

Tour de France dropped in 1988, and although critics were skeptical of his new age brand of music, the public disagreed. They loved it, and 1989’s Garden City expanded his fan base even more. Romantic Christmas followed in 1992, this time on John Tesh’s own record label, GTS. A series of highly successful albums followed: Monterey Nights (1993), Sax by the Fire (1994), and Live at Red Rocks (1995), and John Tesh made the leap to music as his full-time gig.

John Tesh’s extraordinary success has proved the critics wrong; there is indeed a demand for beautifully crafted, new age style orchestral and instrumental music, and Tesh has created the music perfect to fill it. Although he continues to perform and record, he has also in recent years shifted his focus; he and wife Connie Sellecca now host the syndicated television show Intelligence for Your Life. The series provides tips and advice on a host of real-world challenges, including health and weight loss; diabetes and Alzheimer’s; home improvement and family; and employment and finance. The show appears on nearly two hundred stations, and accompanies Tesh’s book, Intelligence for Your Life: Powerful Lessons for Personal Growth.