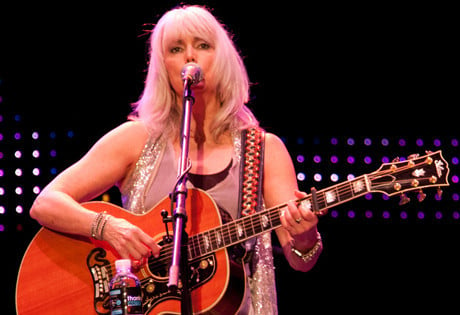 Look no further than WeddingEntertainment.com! We make it easy and stress-free to check availability and pricing for booking Emmylou Harris or any other act in the business. With over 26 years of experience in the industry, we have booked and produced thousands of events for clients worldwide.

Emmylou Harris was born in 1947 and grew up in North Carolina. A stellar academic career led to her graduation from high school as valedictorian, which brought her to the University of North Carolina on a full scholarship, where Emmylou studied music. After graduation, she moved to New York, where she began performing around the city in open-mic venues and coffeehouses.

By the early 1970’s, Emmylou’s performances had garnered the attention of some of music industry’s most notable performers of the time, and Harris was able to form some crucial relationships that eventually led to her first recording contract and debut album, Pieces of the Sky, in 1975. Elie Hotel followed in the same year, and featured the early hits: “Together Again,” “Sweet Dreams,” and “One of These Days.” The album was a successful crossover hit, and firmly established Emmylou Harris as a country music star, earning her a first Grammy for Best Country Vocal Performance, Female, in 1976. For the remainder of the 1970’s and 1980’s, Emmylou released a series of hit albums, including: Luxury Liner (1977), Quarter Moon in a Ten Cent Town (1978), Blue Kentucky Girl (1979), Roses in the Snow (1980), Evangeline (1981), Cimarron (1981), White Shoes (1983), The Ballad of Sally Rose (1985), Thirteen (1986), Angel Band (1987), and Bluebird (1989.) Her first two albums in the 1990’s, Brand New Dance (1990) and Cowgirl’s Prayer (1993), were also successful, but it was Harris’s 1995 release, Wrecking Ball, which became one of the most critically acclaimed works of not only her career, but of the decade itself.

Wrecking Ball includes covers of songs such as “Wrecking Ball,” “Goodbye,” “All My Tears,” “My This Be Love,” and “Orphan Girl.” The album helped Harris to crossover to alternative rock, bringing her music to an entirely new audience and resulting in resurgence in her popularity. A live tour followed, resulting in the live album Spyboy (1998), and in the summer of that same year Emmylou Harris participated in the Lilith Fair, performing alongside such notable contemporary women such as Bonnie Raitt, Sarah McLachlan, and Patty Griffin.  As a result, Emmylou Harris entered the new millennium on a high note, bringing audiences the albums Red Dirt Girl (2000), Stumble into Grace (2003), and All I Intended to Be (2008.) During this time she also collaborated with a number of other artists, including Ryan Adams, Elvis Costello, Mark Knopfler, and Tracy Chapman, and contributed to the Academy-award winning soundtrack for O Brother, Where Art Thou?

Throughout her career so far, Emmylou Harris has been recognized with innumerous awards and honors, including Grammies for Best Female Country Vocal Performance, Best Contemporary Folk Album, Album of the Year, and Best Country Vocal Performance. She has also been recognized as one of the 100 Most Influential Women in Rock and Roll (VH1) and was inducted into both the Country Music Hall of Fame and the American Academy of Arts and Sciences. Emmylou Harris is currently enjoying a career still on the upswing, having turned on a whole new generation to her talents. In addition to bringing music to the masses, Harris is also an political activist, focusing her efforts on women’s rights, animal rights, and organizations which seek to eliminate the use of landmines, to name a few. Her most recent release is the 2011 studio album Hard Bargain.