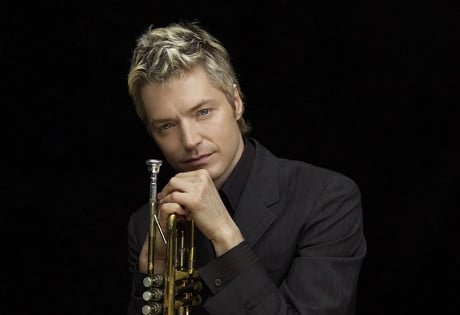 WeddingEntertainment.com makes it easy and trouble-free to check availability and pricing for booking Chris Botti or any act in the business for your wedding. If we don't book an act for you, our service is free. For over 26 years we have booked and produced thousands of events for our clients worldwide. We can also handle everything necessary to produce the show for one all-inclusive price so there are no surprises. Simply fill out an entertainment request form and a booking agent will contact you to discuss the possibility of booking entertainment for your wedding.

Chris Botti was born in 1962 in Portland, Oregon. His upbringing was mainly in Corvallis, and as a young child he spent two years in Italy. With a classically trained pianist for a mother, his childhood was filled with music, and he began learning the trumpet while he was still in grade school.

By the time Chris Botti was seventeen, he had decided to finish his high school requirements by completing his courses at a local community college, for the express purpose of allowing him to free up his schedule enough to play at clubs around town more frequently. Chris Botti selected Mount Hood Community College, a fortuitous choice, since the head of the program director there provided Botti with some of the essential connections that would eventually prove helpful.

After completing his high school requirements, Chris Botti attended Indiana University, where he studied jazz and trumpet under David Baker. Botti also earned a grant from the National Endowment for the Arts to fund his study with George Colemen and Woody Shaw in New York when classes were not in session. Chris Botti quickly made a name for himself as a stellar session player, providing music for legendary greats such as Aretha Franklin and Bob Dylan. Botti was invited to join Paul Simon’s band in 1990, and he remained there until he finally released his solo debut, First Wish, in 1995.

Chris Botti followed up his debut by scoring the film Caught in 1996, and then released a string of successful solo albums:  Midnight Without You (1997), Slowing Down the World (1999), Night Sessions (2001), A Thousand Kisses Deep (2003), When I Fall in Love (2004), and To Love Again: The Duets (2005.) To Love Again featured not only instrumental tracks and orchestral additions from the London Symphony Orchestra, but also guest vocals. Italia, released in 2007, showcases Chris Botti’s Italian influences, and includes works such as “Estate,” “Ave Maria,” “Venice,” and “Italia,” which includes a contribution from Andrea Bocelli. The album garnered Botti a Grammy nomination.

In 2009, Chris Botti released Chris Botti in Boston, a CD/DVD showcasing his Boston performance, which includes the Boston Pops, Yo Yo Ma, John Mayer, Steven Tyler, and other artists. That same year, he was nominated again for three Grammies, including Best Long Form Music Video and Best Pop Instrumental Album.