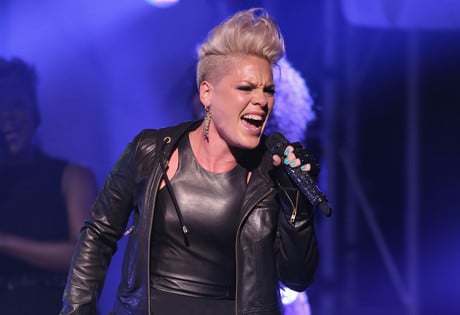 Looking to book Pink entertainment for a wedding anywhere worldwide?

WeddingEntertainment.com makes it easy and trouble-free to check availability and pricing for booking Pink or any act in the business for your wedding. If we don't book an act for you, our service is free. For over 26 years we have booked and produced thousands of events for our clients worldwide. We can also handle everything necessary to produce the show for one all-inclusive price so there are no surprises. Simply fill out an entertainment request form and a booking agent will contact you to discuss the possibility of booking entertainment for your wedding.

Pink was born Alecia Moore in 1979 in Pennsylvania, and grew up in a musical family. By the time she was thirteen, she was often seen as a dancer and backing vocalist around the Philadelphia area, showing early signs of talent and potential. She also began writing her own material as young as fourteen, and one night while still a young teen, a record label executive invited her to audition for an up and coming music group. She auditioned, and ended up as a member of Choice, a group signed to the LaFace label. However, Choice quickly disbanded.

Instead, Pink found herself with a solo deal with the label, and began work on Can’t Take Me Home, working with a number of songwriters and R&B producers. The album went double-platinum upon its release in 2000, spawning the chart-topping singles "Most Girls," "There U Go," and "You Make Me Sick." Between her debut and sophomore albums, Pink participated in the remake of “Lady Marmalade” for the Moulin Rouge soundtrack, singing with Lil’ Kim, Mya, and Christina Aguilera.  The smash hit helped to bolster Pink’s popularity and bring her further recognition before her second album was released.

“Get the Party Started” came next, becoming Pink’s biggest hit to date. As a result, Missundaztood also went double-platinum upon its release. “Don’t Let Me Get Me,” the album’s second single, was equally successful. Additional albums and singles followed, including Try This (2003), I’m Not Dead (2006), and Greatest Hits… So Far!!! (2010), featuring the hit singles “U + Ur Hand,” “Who Knew,” “Raise Your Glass,” “ Fuckin’ Perfect,” "Trouble," and “Stupid Girls,” the last of which became her biggest hit and earned Pink a Grammy nomination for Best Female Pop Vocal Performance. Pink also earned a Grammy for the same category for “Trouble” the previous year.

Thus far in her career, Pink has sold over seventy million singles and forty million albums, and has earned multiple awards including Grammies, Brits, and MTV Video Music Awards. She has been recognized by VH1 as one of the 100 Greatest Women in Music. Pink’s latest album, Beautiful Trauma, arrived in 2017. A few years prior to that, in 2014, she recorded a collaborative album, Rose Ave., in partnership with Dallas Green and under the name You+Me.