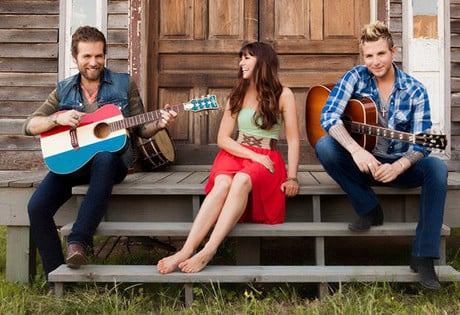 Looking to book Gloriana entertainment for a wedding anywhere worldwide?

WeddingEntertainment.com makes it easy and trouble-free to check availability and pricing for booking Gloriana or any act in the business for your wedding. If we don't book an act for you, our service is free. For over 26 years we have booked and produced thousands of events for our clients worldwide. We can also handle everything necessary to produce the show for one all-inclusive price so there are no surprises. Simply fill out an entertainment request form and a booking agent will contact you to discuss the possibility of booking entertainment for your wedding.

The country music group Gloriana came together when it was founded by musicians Mike and Tom Gossin. The Gossin brothers had grown up in a household where musical pursuits were encouraged, and both studied classical piano from the time they were in elementary school. When they reached their teens, the brothers began establishing their own bands and while in college, at the encouragement of his professors, Tom began studying songwriting and music theory. The duo eventually moved to Nashville, and began performing together, before establishing Gloriana and signing their first record deal.

With the addition of Rachel Reinert, and more recently, Cheyenne Kimball, Gloriana released “Wild at Heart,” its debut single, in 2009 and it rose to the top of the country charts. The group’s debut album, Gloriana, followed shortly thereafter, and earned the band an American Music Award for Breakthrough Artist of the Year. Gloriana’s second studio album, A Thousand Miles Left Behind, followed in 2011, featuring the singles “Wanna Take You Home,” “(Kissed You) Good Night,” and “Can’t Shake You.”

Gloriana is a group on the rise and just getting started, although their breakthrough single has been certified gold and they have already earned multiple awards and nominations, including: Top New Vocal Group and Top New Artist (Academy of Country Music Awards) and Artist of the Year: Breakthrough and Single of the Year, for “(Kissed You) Good Night” (American Country Awards.) Gloriana is preparing for future albums, tours, and performances.