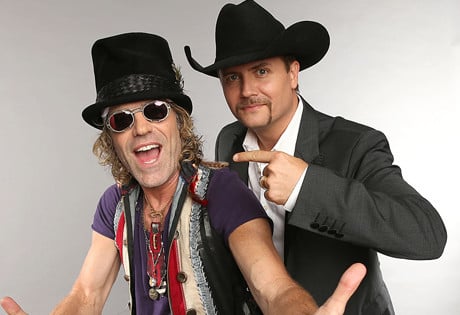 WeddingEntertainment.com makes it easy and trouble-free to check availability and pricing for booking Big & Rich or any act in the business for your wedding. If we don't book an act for you, our service is free. For over 26 years we have booked and produced thousands of events for our clients worldwide. We can also handle everything necessary to produce the show for one all-inclusive price so there are no surprises. Simply fill out an entertainment request form and a booking agent will contact you to discuss the possibility of booking entertainment for your wedding.

Big & Rich was established in 2004 when John Rich formerly of the band ( Lonestar) and Big Kenny came together to form the country music duo. They began writing songs together, and even contributed tracks for McBride & the Ride (“Amarillo Sky”) and Martine McBride (“She’s a Butterfly.”) It was after their success together as songwriters that their managers began suggesting that the two form a musical duo, and so they began recording together. Warner Bros. Records immediately saw the potential in their performing talents, and signed Big & Rich in 2003.

Big & Rich’s debut album, Horse of a Different Color, was released in 2004 and went on to become a smash country hit. The album spawned the singles “Save a Horse (Ride a Cowboy),” “8th of November,” and “Lost in this Moment.” Before moving on to their sophomore effort together, both Big and Rich released solo albums (Son of a Preacher Man by Rich, and The Quiet Times of a Rock and Roll Farm Boy by Big Kenny), but returned with Comin’ to Your City in 2005. The album Between Raising Hell and Amazing Grace followed in 2007.

In addition to their own albums, which often feature contributions from other artists (including John Legend, Lil Jon, and Wyclef Jean), Big & Rich has lent their songwriting and vocal talents to artists such as Cowboy Troy, Gretchen Wilson, Wynonna Judd, Tim McGraw, James Otto, Jon Bon Jovi, and Keith Anderson. Big & Rich also covered John Lennon’s “Nobody Told Me” for the album Instant Karma: The Amnesty International Campaign to Save Darfur in 2007.

Big & Rich continue to write, perform, record, and tour. Their most recent release, Hillbilly Jedi (2012), has proven highly successful, resulting in CMA and ACM nominations for Big & Rich, for Top Vocal Duo in 2012 and 2013.