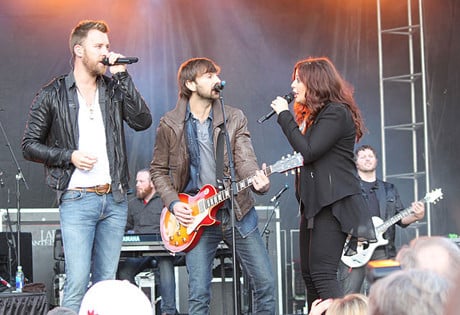 WeddingEntertainment.com makes it easy and trouble-free to check availability and pricing for booking Lady Antebellum or any act in the business for your wedding. If we don't book an act for you, our service is free. For over 26 years we have booked and produced thousands of events for our clients worldwide. We can also handle everything necessary to produce the show for one all-inclusive price so there are no surprises. Simply fill out an entertainment request form and a booking agent will contact you to discuss the possibility of booking entertainment for your wedding.

Lady Antebellum was established in 2006 when Dave Haywood, Charles Kelley, and Hillary Scott came together to form the country pop band. They began performing around the Nashville area in that same year and, within a short period of time, they’d garnered the attention of Capitol Records and signed their first contract. Their first assignment on the label was to accompany Jim Brickman on his song “Never Alone,” which rose to the top of the charts and helped to establish Lady Antebellum’s fan base.

Lady Antebellum’s debut single, “Love Don’t Live Here,” arrived in 2007 and their debut album, Lady Antebellum, came shortly after. The single rose to the top of the country charts and was followed by the additional hits “Lookin’ for a Good Time,” “Baby, It’s Cold Outside,” and “I Run to You,” which became Lady Antebellum’s first number one hit. Since that time, Lady Antebellum has released: Need You now (2010), Own the Night (2011), and On This Winter’s Night (2012), bringing audiences the singles “Need You Now,” “American Honey,” “Our Kind of Love,” “Hello World,” “Just a Kiss,” “We Owned the Night,” and “Dancin’ Away with My Heart.”