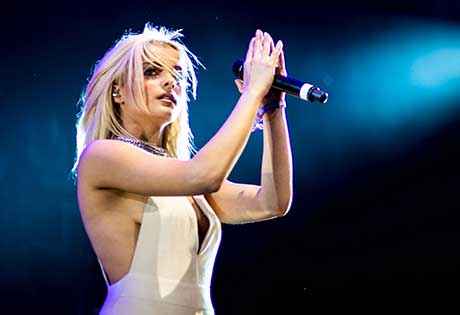 WeddingEntertainment.com makes it easy and trouble-free to check availability and pricing for booking Bebe Rexha or any act in the business for your wedding. If we don't book an act for you, our service is free. For over 26 years we have booked and produced thousands of events for our clients worldwide. We can also handle everything necessary to produce the show for one all-inclusive price so there are no surprises. Simply fill out an entertainment request form and a booking agent will contact you to discuss the possibility of booking entertainment for your wedding.

The singer-songwriter known as Bebe Rexha was born Bleta Rexha in 1989 in New York. Rexha’s parents are Albanian; her father was born in the former Yugoslavia and immigrated to the United States in his early twenties, where he met Bebe’s mother, also of Albanian descent. Bebe grew up in the Staten Island area, where she learned to play a number of instruments as a child, including guitar, trumpet, and piano. She also began singing, and by the time she was a teenager, she was writing and recording her own music.

As a teenager, Bebe won the “Best Teen Songwriter” award from the National Academy of Recording Arts & Sciences during a competition. The win resulted in a contract with a talent scout and greater opportunities for her career advancement; in 2010 she began working with Pete Wentz of Fall Out Boy and eventually joined his side project, Black Cards. Rexha remained with the band for two years, until she felt she was ready to pursue a career as a solo artist.

Rexha signed with Warner Bros. Records in 2013, at first serving as a songwriter and penning hits for notable artists such as Selena Gomez, Rihanna, and Nikki Williams. The single “The Monster,” performed by Rihanna and Eminem, earned Bebe her first Grammy Award, for Best Rap/Sung Performance, and set the stage for Rexha’s debut single, “I Can’t Stop Drinking About You,” released in 2014. The single didn’t chart, but that didn’t deter Bebe; she entered the studio to record her debut EP I Don’t Wanna Grow Up, and also recorded what would become her big breakthrough, the single “My, Myself & I.”

“Me, Myself & I,” a collaboration with the artist G-Eazy, was a top ten hit and led to a string of hit singles to follow, including: “In the Name of Love” (recorded with Martin Garrix); “I Got you,” which was the first single of Rexha’s EP, All Your Fault: Pt 1 (2017); “Meant to Be,” featuring Florida Georgia Line and which appeared on Bebe’s third EP, All Your Fault: Pt 2 (2017); and the smash-hit single “Hey Mama,” recorded with David Guetta and also featuring Nicki Minaj and Afrojack.

Bebe Rexha is still a star on the rise and one to watch in the coming years. She released her debut album, Expectations, in 2018, which went on to reach the number thirteen spot on the mainstream charts and into the top forty internationally.  The album’s lead single, “I’m a Mess,” was also a top-forty, multi-platinum hit.