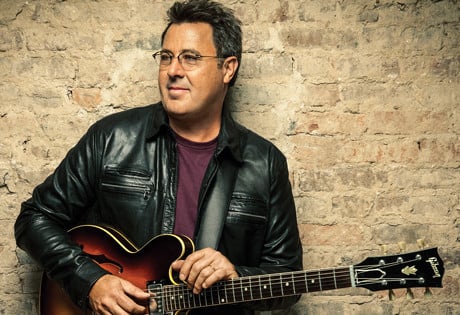 WeddingEntertainment.com makes it easy and trouble-free to check availability and pricing for booking Vince Gill or any act in the business for your wedding. If we don't book an act for you, our service is free. For over 26 years we have booked and produced thousands of events for our clients worldwide. We can also handle everything necessary to produce the show for one all-inclusive price so there are no surprises. Simply fill out an entertainment request form and a booking agent will contact you to discuss the possibility of booking entertainment for your wedding.

Vince Gill was born in 1957 in Oklahoma, to a musically talented father who was already performing in his own country band when young Vince was born. With his encouragement, Gill learned to play guitar, banjo, and many other instruments and by the time he was in high school, he’d formed his first band. Following graduation, Vince Gill performed in a number of bands, before signing to his first record deal and releasing his debut album, Turn Me Loose, in 1984.

For his achievements in music, Vince Gill has been the recipient of numerous awards, including four Academy of Country Music Awards (including awards for Top Male Vocalist in 1984, 1992, and 1993); twelve country Music Association Awards (including multiple awards for Male Vocalist of the Year and Entertainer of the Year); and a staggering twenty Grammys from forty nominations, including awards for Best Country Vocal Song, Best Country Vocal Performance, and Best Country Album (for “These Days”) In total, Vince Gill has charted more than forty singles on the country charts and his album sales exceed twenty-two million. Gill received his star on the Hollywood Walk of Fame in 2012.

Most recently, Vince Gill began a tour focusing on bluegrass performances, and recorded “What You Need From Me” with Bonnie Tyler for her album Rocks and Honey (2013.)  He also collaborated with Kelly Clarkson and the Time Jumpers. Gill is planning for future country albums set to release soon.