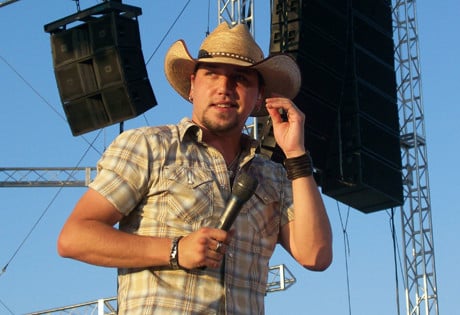 Look no further than WeddingEntertainment.com! We make it easy and stress-free to check availability and pricing for booking Jason Aldean or any other act in the business. With over 26 years of experience in the industry, we have booked and produced thousands of events for clients worldwide.

Jason Aldean was born in 1977 in Macon, Georgia and grew up splitting his time between his mother’s home and his father’s home in Georgia and Florida. Jason’s father strongly influenced his love of music, teaching him to play guitar and often playing alongside him. The young Aldean showed a talent for playing by ear, and both his parents recognized this talent and encouraged him to pursue music as a potential career.  By the time he was a teenager, Jason was performing around town at the local VFW hall, fairs, and talent contests. Upon graduating from high school, Jason established a band and began performing in Georgia, Florida, and Alabama at local bars and clubs. A performance in the late 1990’s, at an Atlanta nightclub, brought Jason Aldean’s talents to the attention of a song publishing company, which within a few years led to his first recording contract.

In 2005, Jason Aldean’s debut single, “Hicktown,” was released. His debut album, Jason Aldean, followed shortly thereafter, and both songs peaked at the top of the charts. The follow-up singles, “Why” and “Amarillo Sky,” were equally successful, with the later earning Aldean an Academy of Country Music nomination for Song of the Year. Jason Aldean was awarded the Academy of Country Music’s Award for Top New Male Vocalist in 2006 and his debut album went on to certify platinum within two years. Additional albums have followed since: Relentless (2007), Wide Open (2009), and My Kinda Party (2010), spawning the singles “Johnny Cash,” “Laughed Until We Cried,” “She’s Country,” “Big Green Tractor,” “The Truth,” “Crazy Town,” “My Kinda Party,” “Don’t You Wanna Stay,” “Dirt Road Anthem,” “Tattoos on this Town,” “Fly Over States,” “Take a Little Ride,” and “The Only Way I Know.” Thus far in his burgeoning career, Jason Aldean has placed nine songs on the country charts in the number one position, and seven more in the top ten.

Jason Aldean is just getting started, but he has already earned multiple awards for his music, including the Musical Event of the Year for “Don’t You Wanna Stay,” (with Kelly Clarkson) and the Country Music Association Country Album of the Year for 2011. Aldean continues to perform, record, and tour; his most recent album is Night Train, released in 2012.