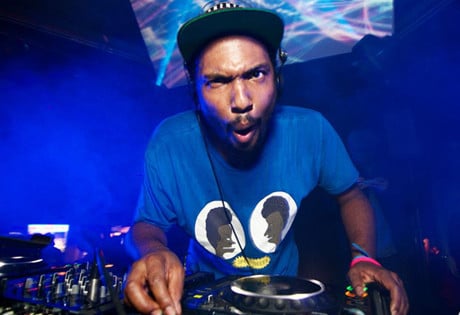 WeddingEntertainment.com makes it easy and trouble-free to check availability and pricing for booking 12th Planet or any act in the business for your wedding. If we don't book an act for you, our service is free. For over 26 years we have booked and produced thousands of events for our clients worldwide. We can also handle everything necessary to produce the show for one all-inclusive price so there are no surprises. Simply fill out an entertainment request form and a booking agent will contact you to discuss the possibility of booking entertainment for your wedding.

The DJ known as 12th Planet was born John Dadzie and grew up in the Los Angeles area of California.  While still a young man in high school, John developed a love of the electronic music scene and began working as a DJ in the local area. In 2006, Dadzie decided to foray into dubstep, a move which led to his adoption of the moniker 12th Planet.

12th Planet has since become an iconic figure in dubstep, credited with increasing the popularity of the culture in America. 12th Planet tours frequently around the world, performing in such far away locations as New Zealand and Australia, and collaborates frequently with a number of notable producers, including Skream, Doctor P, and Datsik. His discography is impressive, giving audiences some of the most successful remixes in the last few years, including “Get It,” “Apocalypse Theme,” “Cookies Fly,” “Youth Blood,” “Victims,” “Hold On,” “Nobody Gets Out Alive,” “DIRTY,” “All I Ask of You,” and most recently, “Slice & Dice.” 12th Planet appears as a featured artist on the singles “Way Too Far” (with Korn); “Right on Time” (with Skrillex); and “Needed Change” (also with Skrillex.)

Most recently, 12th Planet finished in the top twenty of the America’s Best DJ competition in 2013. 12th Planet is just getting started in his career as one of dubstep’s most significant artists, and has plans for additional collaborations, performances, and recordings in the coming year.