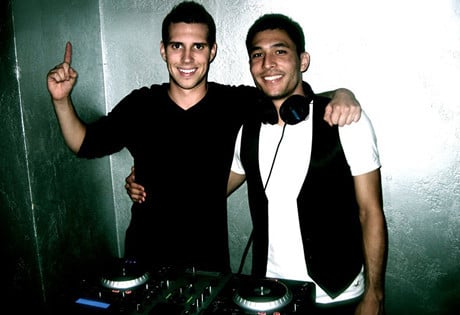 Looking to book Slander entertainment for a wedding anywhere worldwide?

WeddingEntertainment.com makes it easy and trouble-free to check availability and pricing for booking Slander or any act in the business for your wedding. If we don't book an act for you, our service is free. For over 26 years we have booked and produced thousands of events for our clients worldwide. We can also handle everything necessary to produce the show for one all-inclusive price so there are no surprises. Simply fill out an entertainment request form and a booking agent will contact you to discuss the possibility of booking entertainment for your wedding.

Slander is a duo made up of Derek Andersen and Scott Land. These two work extremely hard at their passion of trap music. You would normally find Slander’s music at a large rave or music festival for sure. Slander’s music is vicious and to the point, it makes its own statement. Some remixes they are famous for are “Love Is Not Enough,” originally produced by Above & Beyond along with Showtek’s “We Like To Party.” Slander is known for their ability to stay on top of their game producing hit after hit for years at a time, and they do not plan on stopping any time in the near future.

Slander started out their career performing in small nightclubs in Orange County, California after deciding to pursue their passion for music as a duo. They were one of the first trap/electronic dance creators and had a hard time getting started on the scene. However, the hardships Slander faced only helped to make them stronger and create bravery in their creation of music.

In order to get where Slander wanted to be and be performing at live music festivals, Slander looked into signing with Icon. After reviewing the company with others who have used Icon in the past, Slander felt confident in trusting them with their music career. Later after they signed, Slander performed at Coachella in California. This performance helped to boost their confidence as well as their fan base! Slander was now making a name for themselves and not just through the computer, television or the radio. Slander always makes sure to play every show like it is the last show they will ever perform to make sure that they are always giving it their best effort possible.

Something that Slander always succeeds with is their live performance. Slander is able to bring something to the stage that others have a hard time doing. It is important to get the energy you and your band have out to the audience and Slander does that with ease. Performing live is something that always came natural to Slander.

With their recent success only a few new remixes, Slander’s fans have increased by thousands. For anyone to gain this many followers in this day and age is an extreme accomplishment especially to the young duo. Slander works extremely hard at making their music unique and one that stands out from the rest.

Slander has partnered and collaborated with NGHTMRE to create “GUD VIBRATIONS,” Seven Lions to create “Don’t Leave,” and Bastille to create “Pompeii.” As you can see Slander pairs with different types of artists so that they can put their personal ‘Slander’ spin on others music to create memorable remixes.

As of this year, Slander is going on their “Gud Vibrations” Tour. Slander started their tour on November 25, 2016 and goes until January 6, 2017. They are going to be traveling all over the United States.