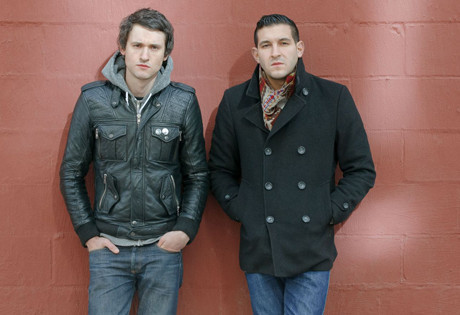 WeddingEntertainment.com makes it easy and trouble-free to check availability and pricing for booking Holy Ghost or any act in the business for your wedding. If we don't book an act for you, our service is free. For over 26 years we have booked and produced thousands of events for our clients worldwide. We can also handle everything necessary to produce the show for one all-inclusive price so there are no surprises. Simply fill out an entertainment request form and a booking agent will contact you to discuss the possibility of booking entertainment for your wedding.

The synthpop duo known as Holy Ghost was established by Alex Frankel and Nick Millhiser in Brooklyn, New York, in the mid 2000’s. Both men grew up in New York together and were classmates as far back as elementary school. After performing in the hip hop group Automato together, both Millhiser and Frankel remained collaborators, and they regrouped to release the highly successful single “Hold On” in 2007.

The success of their debut led to remix work on a number of major hits, including music from MGMT and Moby, and the release of and EP, Static on the Wire, in 2010. In the following year, Holy Ghost released its self-titled debut album, featuring the hit singles “Do It Again,” “Wait & See,’ “Hold My Breath,” and “It’s Not Over.” During this time, Holy Ghost continued to release remixes, including: “I Love to Move In Here” (Moby); “Hearts on Fire,” (Cut Copy); “Of Moons, Birds and Monsters” (MGMT); “Lisztomania” (Phoenix); “Drunk Girls” (LCD Soundsystem); and “Somebody to Love Me” ( Mark Ronson & The Business Intl.)

Most recently, Holy Ghost released their sophomore album effort, Dynamics, in the fall of 2013. Holy Ghost continues to perform, record, and remix/collaborate with other artists.