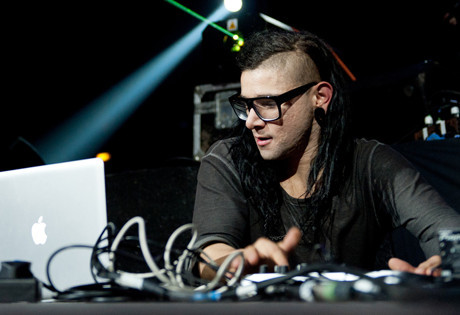 Looking to book Skrillex entertainment for a wedding anywhere worldwide?

WeddingEntertainment.com makes it easy and trouble-free to check availability and pricing for booking Skrillex or any act in the business for your wedding. If we don't book an act for you, our service is free. For over 26 years we have booked and produced thousands of events for our clients worldwide. We can also handle everything necessary to produce the show for one all-inclusive price so there are no surprises. Simply fill out an entertainment request form and a booking agent will contact you to discuss the possibility of booking entertainment for your wedding.

The artist known as Skrillex was born Sonny John Moore in 1988 in California. Despite suffering as a target of school bullies as a teenager, leading to his leaving school before graduating, Skrillex found his calling in music and began learning to play guitar. Ultimately, Skrillex found his outlet in the local music scene and in 2004, he joined the band From First to Last, as guitarist and lead singer. From First to Last released their debut album, Dear Diary, My Teen Angst Has a Body Count, in 2004. The follow-up, Heroine, was released two years later, and by that time, Skrillex was ready to launch his own solo career.

After releasing the songs “Glow Worm,” “Equinox,” and “Signal” to his MySpace page, Skrillex launched a series of live performances in a tour that brought him alongside such bands on the rise as Strata and Monster in the Machine. Another tour in 2008 followed, and in 2009, Skrillex released the EP Gypsyhook, followed by the EP My Name is Skrillex, in 2010. Since that time, Skrillex has been working non-stop, continuing to write and perform his own music and also providing vocals for such notable metal bands as Bring Me the Horizon.  He released the additional EPs: Scary Monsters and Nice Sprites, More Monsters and Sprites, Bangarang, and Make It Bun Dem After Hours, and the songs: “Bring Out the Devil,” “Get Up,” “Ruffneck,” “First of the Year,” “Cinema,” and “Reptile,” the latter of which has been featured in commercials for various video games.

Most recently, Skrillex formed OWSLA, his own label, and released his seventh EP, Leaving (2013.) He also contributed to the soundtrack for Spring Breakers (2013), and received Grammys for Best Dance Recording and Best Remixed Recording for “Bangarang” and Promises, a remix crafted with the artist Nero.