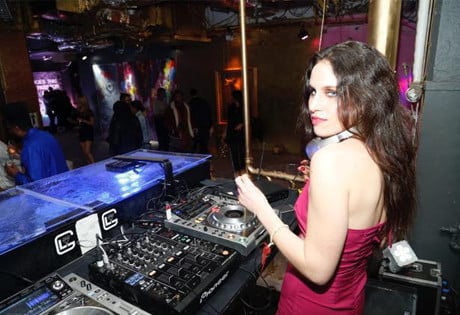 WeddingEntertainment.com makes it easy and trouble-free to check availability and pricing for booking Samantha Michelle or any act in the business for your wedding. If we don't book an act for you, our service is free. For over 26 years we have booked and produced thousands of events for our clients worldwide. We can also handle everything necessary to produce the show for one all-inclusive price so there are no surprises. Simply fill out an entertainment request form and a booking agent will contact you to discuss the possibility of booking entertainment for your wedding.

Canadian actress/ DJ / filmmaker Samantha Michelle was born in Toronto in 1989. At the age of 17, she moved to New York City to study at NYU; camped out in Greenwich village, reading and writing by day, and roaming around nightclubs by night, she fell hard and fast for music, cinema and storytelling.

After graduating from NYU and Oxford University, where she studied history, drama, literature, politics and art, she moved to LA and begun working as an actress. She’s worked on feature films and TV shows including Atom Egoyan’s The Captive (2014), Showcase’s Lost Girl (2015) and Guillermo Del Toro’s The Strain (2015). She then moved to London, where she had trained at the London Academy of Music and Dramatic Art, to pursue her passion for live performance, and began to focus her work in the theatre. She starred in a number of productions in both the UK and North America, ranging from the classics - Shakespeare, Strindberg, Ibsen - to provocative and contemporary pieces of new writing.

Her career as a DJ kicked off in 2012, one fateful evening at The Groucho Club in London; rather swiftly, this happy accident transformed into a full-time focus as she soon found herself traveling the world, performing at private events, spreading her love for the music of the 1960s and 70s. She then joined forces with her fellow soul- loving best friend; the two quickly became “London’s most exciting DJ duo” (Flaunt Magazine) The Smoking Guns, running residencies around Soho and East London and working extensively within the members’ club circuit. The girls performed at major music festivals such as Glastonbury, The Secret Garden Party, Red Rooter, and hosted their own music and culture show on Soho Radio, where they interviewed acclaimed musicians and music journalists and fully indulged in their shared love of rare records and their unique narratives.

In 2015, she stepped behind the camera, and directed her first fashion film for the iconic 70s rock-n-roll shoe cobbler Terry De Havilland which was selected as finalist for ELLE Canada’s Fashion Film Competition. Her first narrative short as writer-director, The Dark Side of The Sun (2016), premiered at The Cannes Film Festival Short Film Corner and has since screened at a number of film festivals in NYC and London.

Samantha recently moved back to her native side of the pond, and has settled back in her heart’s home – Greenwich village – she continues to write, direct, act, and above all – play. As a DJ, she remains committed to a sound that is vividly vintage, as she fuses familiar classics with lost treasures, moving swiftly between the genres of soul, rhythm and blues, ska, funk, and the bass of it all, rock and roll.

Above And Beyond Learn More >