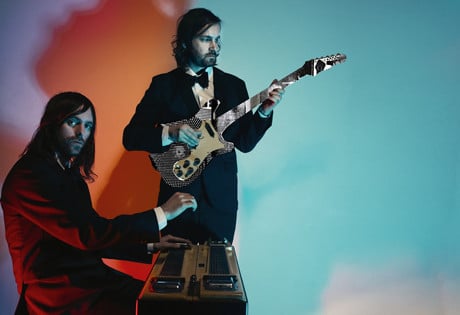 Looking to book Ratatat entertainment for a wedding anywhere worldwide?

WeddingEntertainment.com makes it easy and trouble-free to check availability and pricing for booking Ratatat or any act in the business for your wedding. If we don't book an act for you, our service is free. For over 26 years we have booked and produced thousands of events for our clients worldwide. We can also handle everything necessary to produce the show for one all-inclusive price so there are no surprises. Simply fill out an entertainment request form and a booking agent will contact you to discuss the possibility of booking entertainment for your wedding.

Ratatat, originally from Brooklyn, New York, is a duo of Mike Stroud and music producer Evan Mast. These guys work together to produce experimental rock, electronic rock and began their careers in early 2001. After meeting in college, the duo decided to start recording music together. Stroud played the guitar, synthesizers and other instruments and Mast played the bass, percussion, and synthesizers as well. This duo was going to be hard to top and they were ready to take on the music industry together.

Another great accomplishment by Ratatat in 2004, was their collaboration to blend different remixes of different tracks by different artists, which was called Ratatat Remixes Volume 1. Some artist featured in this included hip-hops Missy Elliott, Kanye West, Jay-Z and Raekwon. After the success of their first album, Ratatat’s success had continued to grow.

In 2006, Ratatat performed in New York City at the Guggenheim Museum. Only a few days after that performance, there was a new album accidentally releases via the Internet. This ended up being their next actual album, “Ratatat Remixes Volume 2” released in early 2007. It was then time for Ratatat to take a break from producing their music, so they went on tour. Ratatat’s tour included an American tour along with a European tour that lasted a total of about a year and a half.

Another successful album led Ratatat to create their third album, LP3. This album debuted three hit singles, “Shiller,” “Shempi,” and “Mirando.” In this album Ratatat also worked with another artist, Kid Cudi to create one of their songs, “Man on the Mood: The End of Day.” From the success of this collaboration, the two were soon performing on live Television in late 2009.

Ratatat’s fourth album, LP4, was potentially recorded around the same time as LP3, just released at a later date. I’m sure by now, many of you are wondering what LP even means, but it means Long Play. LP4 was more of an alternative rock, experimental hip hop album that Ratatat produced. Both LP3 and LP4 are very similar in sounds and tunes, however the songs are completely different. LP4 hit the Billboard charts under the top 100 selling thousands of copies within the first week of Ratatat’s debut.

As the fifth and final album was making its way to the stands, Ratatat was performing live at music festivals. Ratatat performed “Cream On Chrome” at Coachella in 2015. This song topped the charts in the top 100 of 2015 as well, displayed in January of 2016. The album, Magnifique, did not come out until later that year. Part of Ratatat’s live performances that make them stand out is the energetic display of lights, along with the colors projected onto the screens and stage.