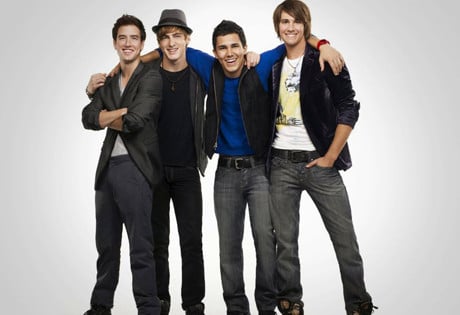 WeddingEntertainment.com makes it easy and trouble-free to check availability and pricing for booking Big Time Rush or any act in the business for your wedding. If we don't book an act for you, our service is free. For over 26 years we have booked and produced thousands of events for our clients worldwide. We can also handle everything necessary to produce the show for one all-inclusive price so there are no surprises. Simply fill out an entertainment request form and a booking agent will contact you to discuss the possibility of booking entertainment for your wedding.

Big Time Rush formed in 2009 in Los Angeles, California, with members Logan Henderson, James Maslow, Kendall Schmidt, and Carlos Pena Jr. launching their debut album BTR in 2010. A typical American “boy band,” Big Time Rush quickly launched to superstardom thanks to their association with Nickelodeon and a fan base with absolute devotion to the band and their television series of the same name.

Following the experiences of four Minnesota hockey players turned boy-band members, Big Time Rush’s creators took their inspiration from the successful 1960’s show The Monkees, repackaging the concept for a new generation. The television series Big Time Rush launched on November 28th, 2009, quickly becoming one of the station’s highest rated shows. Nickelodeon immediately renewed the series for a second, then third season, and in 2012 Nickelodeon renewed Big Time Rush for a fourth season.

Following their television series launch on Nickelodeon, Big Time Rush’s debut album landed on the charts at number three. Timing the release of their first single, “Big Time Rush,” with the series one-hour preview special ensured almost instant stardom and staggering success for both the show and the band itself.  Other singles, including “City is Ours,” “Big Night,” “Any Kind of Guy,” and “Halfway There,” were also launched via the series, helping to launch BTR to gold status.

Elevate came next in 2011, with the singles “If I Ruled the World” and “Music Sounds Better with U.” A tour to promote the album followed to crowds of young girls clamoring to see Big Time Rush perform in person. But after the release of the group’s 2013 album, 24/Seven, Big Time Rush announced that the group would be going on an indefinite hiatus while the members pursue various solo projects.

Although Big Time Rush has yet to reunited, members Logan Henderson, James Maslow, Kendall Schmidt, and Carlos Pena Jr. continue to perform as individual artists and appear in various television and film projects – both Maslow and Pena appeared as contestants on Dancing with the Stars, and both men also released debut solo tracks recently. Henderson also released his debut solo single recently, and Schmidt joined the group Heffron Drive in 2014 and launched his own record label in the same year.