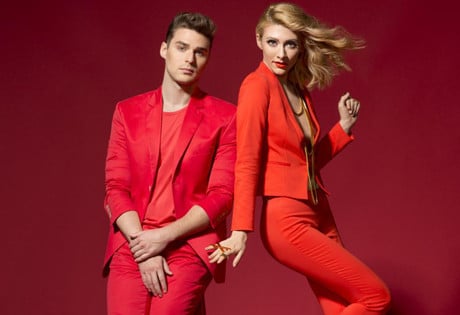 Looking to book Karmin entertainment for a wedding anywhere worldwide?

WeddingEntertainment.com makes it easy and trouble-free to check availability and pricing for booking Karmin or any act in the business for your wedding. If we don't book an act for you, our service is free. For over 26 years we have booked and produced thousands of events for our clients worldwide. We can also handle everything necessary to produce the show for one all-inclusive price so there are no surprises. Simply fill out an entertainment request form and a booking agent will contact you to discuss the possibility of booking entertainment for your wedding.

The American pop duo known as Karmin was established in the mid 2000’s, when Nick Noonan and Amy Heidemann met at the Berklee College of Music. The two students found they had similar tastes in music and began writing material together while still attending classes. After graduating in 2008, they recorded their first EP, Inside Out, which was released two years later.

Karmin used YouTube to generate a self-marketed fan base and eventually caught the attention of Ellen DeGeneres. The talk show host invited them to perform on her daytime show, garnering further buzz and recognition from other celebrities, including Ryan Seacrest. Eventually, Karmin caught the attention of Epic Records and signed with the label in 2011. A return to the studio with the support of nearly a dozen notable producers yielded a significant amount of material, but it would be another three years before a debut album would be released. In the meantime, Karmin released the songs "Crash Your Party," "Brokenhearted," and "Hello."

Karmin performed on Dick Clark’s New Year’s Rockin’ Eve in 2012, singing their song "Hello." The following morning they performed the song "Borkenhearted" for Good Morning America. Additional work during this time period includes a collaboration with Big Time Rush and the release of a debut single, "Acapella," which arrived in the summer of 2013. In support of the single, Karmin performed on the Jimmy Kimmel Show and announced an upcoming tour scheduled for 2014.

Despite the delay of a debut album, Karmin has still been recognized with a number of industry accolades. So far, Karmin has won an American Music Award for New Media Honoree, an MTV O Music Award for Web Born Star, and PopRepublic It List Awards for Breakthrough Artist and Best Single (for "Brokenhearted.") In addition, Karmin has been nominated for two Teen Choice Awards and two additional PopRepubic It List Awards. Karmin’s debut album, Pulses, is scheduled for release in 2014.