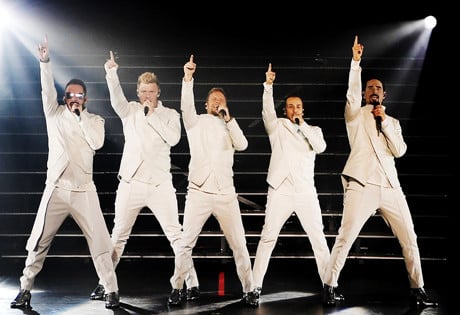 Look no further than WeddingEntertainment.com! We make it easy and stress-free to check availability and pricing for booking Backstreet Boys or any other act in the business. With over 26 years of experience in the industry, we have booked and produced thousands of events for clients worldwide.

The Backstreet Boys exploded onto the pop music scene in 1996 with their debut album landing in the Top Ten around the world. With their blend of hip-hop, R&B, and dance, the Backstreet Boys created a formula for success which would find surprising endurance throughout the next two decades and beyond.

Brian Littrell and Kevin Richardson began singing as children in local church choirs and festivals in their native Lexington, KY. In Orlando, Florida, Nick Carter, Howie Dorough, and A.J. McLean were aspiring musicians and actors who continued to encounter each other at local auditions for theater and television.
Carter, McLean, and Dorough formed a vocal a vocal trio, and after Richardson began working as a tour guide at Disney World in Orlando, the four eventually met up and Kevin was added to the group. Kevin Richardson invited Brian Littrell to join, and the Backstreet Boys were born.

With the assistance of boy band mogul Louis J. Pearlman, the Backstreet Boys found themselves under the management of the same pair who had managed the New Kids on the Block in the 1980’s – Johnny and Donna Wright. Now heavily supported by a strong management team with staggering resources, the Backstreet Boys eventually signed to Jive Records in 1994. The debut album The Backstreet Boys was released in 1995 in Europe, and then in the United States the following year.

The Backstreet Boys’ popularity rose immediately upon the album release in Europe, further strengthening their United States debut. “We’ve Got it Goin’ On,” their first single off the album, was an enormous success overseas, but found itself initially stalled on the United States charts. “Quit Playin' Games (With My Heart)" and "As Long as You Love Me" fared much better in the states, and the additional hits "Everybody (Backstreet's Back)," "I'll Never Break Your Heart," and "All I Have to Give" all topped the charts, with two going on to become Top Five hits. Their success launched the album to fourteen million sales in the United States.

The Backstreet Boys were solidified as pop superstars, and additional albums followed their debut success. Millennium debuted at number one upon its release in 1999, and Black & Blue followed to be equally successful. The albums spawned the hit singles: "I Want It That Way," "Show Me the Meaning of Being Lonely," "Larger Than Life," "The Call,” "The One", and "Shape of My Heart.” Tours followed for each of the albums, but after seven years the Backstreet Boys decided to take a hiatus to pursue independent personal and professional goals. Some of the Backstreet Boys married and started families, and Nick Carter and Brian Littrell began solo careers.

Today, the Backstreet Boys have beaten the odds and remain an enduring “boy band” from the 1980’s, continuing to draw crowds from not only their original fans but the next generation. With sales of over 130 million records, they are also one of the best-selling music artists across the globe.

The Backstreet Boys recently launched their 2017 Vegas residency, titled “Backstreet Boys: Larger Than Life.” They also recently released the documentary film Backstreet Boys: Show “Em What You’re Made Of. The film was a two-year journey in the making and follows the boys through the making of their 2013 album and into the supporting tour which followed.