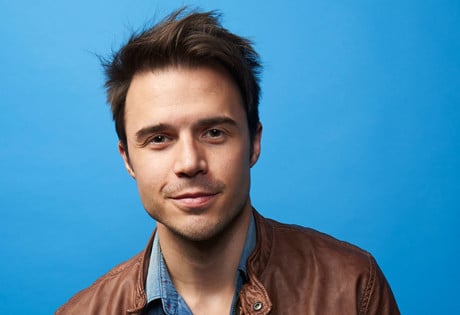 WeddingEntertainment.com makes it easy and trouble-free to check availability and pricing for booking Kris Allen or any act in the business for your wedding. If we don't book an act for you, our service is free. For over 26 years we have booked and produced thousands of events for our clients worldwide. We can also handle everything necessary to produce the show for one all-inclusive price so there are no surprises. Simply fill out an entertainment request form and a booking agent will contact you to discuss the possibility of booking entertainment for your wedding.

When he was seven years old, Kris listened to a cassette of Michael Jackson’s “Dangerous” and his life changed forever. “I’d be alone in my room and I would sing and dance and try different hats on. I’d stand in front of the mirror and try to moonwalk, but it just didn’t work. One night my dad walked in and caught me. I stopped in my tracks but he thought it was hilarious.” Despite that embarrassing moment, Kris’ parents, Neil and Kimberly, were always supportive of their son’s interest in music and never once suggested that he consider any other career than the one he was most interested in. Neil was a musician himself – he played guitar and sang lead vocals for a rock band called Maxxzoid. He also had a record collection and Kris enjoyed listening to his dad’s albums, especially artists like Garth Brooks, Journey, Queen and Foreigner.

When Kris was born on June 21, 1985, his dad gave up his music career and went to work at a car dealership to support his family. Kris’ talent was apparent as early as the fourth grade, when he learned to play the viola and joined the school orchestra. “I tried to be cool and play baseball. Playing viola is not the coolest thing in the world. I kept going but stopped right before college.” By that time, Kris had already picked up another instrument. “At 13, I was a chubby little kid trying to play the guitar. My brother Daniel would go swimming all summer so I was home alone and no one knew what I was doing all day.” Kris never took a lesson, so his guitar-playing was entirely self-taught. By the time he enrolled in college, he knew he wanted to play music professionally. “When I was a freshman I realized I needed to start writing songs.” During his sophomore year, he played his first gig at a local bar. “It was in downtown Conway and the place was filled because it was the bar’s opening night. It was also their closing night. I don’t think it was our fault, because everyone said we played well. That night is when I got the encouragement to keep going.” Kris played gigs in nearby Little Rock and Fayetteville and recorded a CD when he left college in the middle of his junior year. He continued to play gigs at night while working as a salesperson at Hibbert Sporting Goods during the day.

Though not an avid television viewer – Kris and his wife Katy don’t own a TV – Kris did see the Season 6 episodes of “American Idol” when his friend Sean Michel won praise from the judges during his audition. “It was great to see someone from Arkansas make it to Hollywood.” Living with his parents during season 7, Kris became hooked on “Idol.” In July 2008, Kris’ brother Daniel decided to audition in Louisville, Kentucky, and asked Kris and a friend to go with him. “We arrived and there were 12,000 people standing there and we were the last ones to sign up. It was intimidating,” Kris says.

Kris and Daniel survived the first round of judging but only Kris made it into see Simon, Paula, Randy and Kara. Randy was the first to say yes, followed by Simon, then Paula and Kara. Kris and Katy were married that same month and after the honeymoon flew to Hollywood. “I was just hoping to get a little TV time so someone would recognize me and I could start a music career,” says Kris.

Kris made it from Hollywood week to the top 36 to the top 12 and survived elimination week after week, heading into the finale with Adam Lambert. When Ryan Seacrest read the The Band Perry of the winner, after a long pause he said. “Kris Allen.” Kris’ path to victory included memorable performances of Bill Withers’ “Ain’t No Sunshine,” Michael Jackson’s “Man in the Mirror” and Kanye West’s “Heartless.” Kris was praised by the judges for his original arrangements of such well-known songs. “What I do is completely forget about the original version and ask myself how I can play the song when it comes to phrasing, chord structure and emotion. I hear what it’s going to sound like in my head and run with it. Hopefully it’s a way that no one has ever thought of doing it before.” Since the finale, Kris has had multiple songs appear on the Billboard charts. “That was crazy!” he exclaims. “Four months before that we were all unknown. That first moment I knew I had five songs on the Billboard chart was very cool.” At the same time, his finale song “No Boundaries” was No. 1 on the iTunes chart. Kris found out when a friend sent him a text message. “I had no idea. That was crazy, too!” It’s been an incredible journey for the 24-year-old who came very close to giving up on having a music career. “I was going to return to college and get a decent job so my wife and I could have a comfortable life together, which would have been fine. But things worked out a different way, and I’m really happy!” Kris is currently on tour promoting his self-titled debut album released on 19 Recordings/Jive Records. His first single “Live Like We’re Dying” has sold over 1.5 million to date. His second single “The Truth” ft. Pat Monahan of Train, is currently climbing the charts as it hits the airwaves.