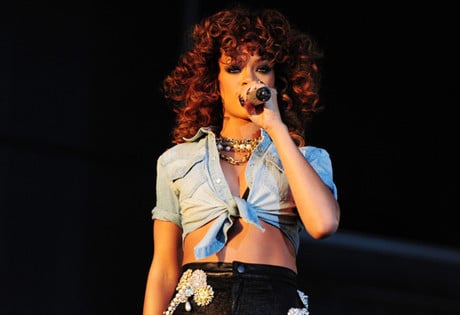 Looking to book Rihanna entertainment for a wedding anywhere worldwide?

WeddingEntertainment.com makes it easy and trouble-free to check availability and pricing for booking Rihanna or any act in the business for your wedding. If we don't book an act for you, our service is free. For over 26 years we have booked and produced thousands of events for our clients worldwide. We can also handle everything necessary to produce the show for one all-inclusive price so there are no surprises. Simply fill out an entertainment request form and a booking agent will contact you to discuss the possibility of booking entertainment for your wedding.

Rihanna emerged in the summer of 2005 with her hit single “Pon de Replay,” a Caribbean-styled pop and dance sensation. An unknown superstar from the tiny Caribbean island of Barbados, Rihanna quickly rocketed to stardom on the strength of that initial song and her youthful, green-eyed beauty.

Rihanna was born Robyn Rihanna Fenty and spent her first seventeen years in the St. Michael’s parish of Barbados before finding herself at number two on the Billboard charts in the United States. As a child, Rihanna exhibited talents which set her apart in her tiny community, winning talent contests and beauty contests while still a little girl. A chance encounter in Barbados would lead to Rihanna’s big break, when Evan Rogers - a New York-based music producer associated with the likes of Christina Aguilera, Kelly Clarkson, Jessica Simpson, and NSYNC - encountered Rihanna’s talents while vacationing on the island with his wife.

Rogers immediately recognized Rihanna’s talent and potential and offered her the opportunity to record some demos. Under the guidance of Rogers and his long-time production partner, Carl Sturken, Rihanna recorded demos that eventually sparked the interest of Shawn “Jay-Z,” president of Def Jam Records. An audition followed, and an immediate offer was made. Rihanna grabbed the opportunity and signed a contract on the spot.

“Pon de Replay” was the first single released from Rihanna’s Music of the Sun in the summer of 2005. The album was produced almost entirely by Sturken and Rogers, and featured an urban-pop songwriting flavor seasoned with Caribbean rhythms. In 2006, Rihanna released A Girl Like Me, and the album peaked in the top five on the United States charts. Good Girl Gone Bad followed in 2007, and launched the hit singles “Take a Bow,” “Don’t Stop the Music,” and “Disturbia.”

Since that time, Rihanna has released the additional chart-topping albums: Rated R (2009), Loud (2010), Talk That Talk (2011), Unapologetic (2012), and Anti (2016.) Notable singles include the hits: “Work,” “Umbrella,” “Take a Bow,” “Disturbia,” “Only Girl (in the World),” “S&M,” “We Found Love,” “Diamonds,” and “Stay.” So far in her career, Rihanna has garnered twelve Billboard Music Awards, five American Music Awards, and eight Grammy Awards. She has sold more than 230 million records worldwide, and in 2012, Time Magazine named Rihanna one of the most influential people in the world.

Rihanna continues to record, perform, and tour. In recent years, she has also branched her entertainment career into acting, with featured roles in the films: Annie (2014), Home (2015), and Valerian and the City of a Thousand Planets (2017.) Rihanna will also appear the upcoming film, Ocean’s Eight, scheduled for release in early 2018.