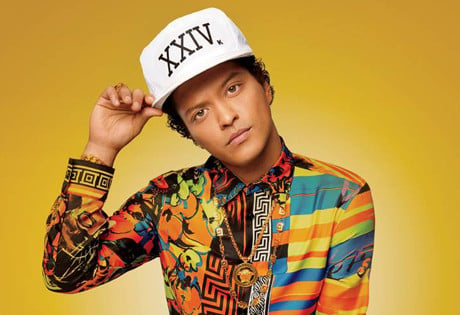 WeddingEntertainment.com makes it easy and trouble-free to check availability and pricing for booking Bruno Mars or any act in the business for your wedding. If we don't book an act for you, our service is free. For over 26 years we have booked and produced thousands of events for our clients worldwide. We can also handle everything necessary to produce the show for one all-inclusive price so there are no surprises. Simply fill out an entertainment request form and a booking agent will contact you to discuss the possibility of booking entertainment for your wedding.

Bruno Mars was born Peter Gene Hernandez in 1985 in Hawaii. As a young child, Bruno learned to play the guitar and began performing in local venues and at local events, and even impersonated some of his idols, such as Michael Jackson and Elvis Presley. His early exposure to a variety of different music, including hip hop, rock, R&B, and reggae, helped him to create the unique sound for which he is noted today.

After graduating and moving to Los Angeles as a young adult, Bruno Mars embarked on a full-scale pursuit of a career in music. His talents brought him to the attention of producer Philip Lawrence, and then Aaron Bay-Schuck of Atlantic Records. Before launching his own career, Bruno Mars contributed to songs for a variety of other notable artists, including Brandy, Alexandra Burke, Flo Rida, and Travie McCoy, with whom his contribution on the hit song “Billionaire” led to further recognition of his talents. By 2010, Mars had released his debut album, Doo-Wops & Hooligans, which spawned a number of hit singles, including “Grenade” and “Just the Way You Are,” the latter of which sold more than twelve million copies. The album itself debuted a number three and went on to sell more than fifty thousand copies. Unorthodox Jukebox came next in 2012 and debuted at number two on the charts. The album featured the songs: “Locked out of Heaven,” "Gorilla", "When I Was Your Man", "Natalie", "Treasure", "Moonshine", "Money Makes Her Smile", "Show Me", and "If I Knew".

But Mars’s biggest breakthrough was still to come, with the album Unorthodox Jukebox in 2012. The album earned Mars a Grammy for Best Pop Vocal Album and its single, “Locked Out of Heaven,” became both Record of the Year and song of the Year. “When I Was Your Man” was also nominated for Best Pop Solo Performance. Another Grammy Award came in 2017, for Adele’s “All I Ask,” which was written by Mars and featured on her Album of the Year, 25.

Today a well-established powerhouse of a performer, Bruno Mars has earned an extraordinary level of recognition for his talents, selling more than one hundred million records worldwide and receiving numerous awards and nominations, including nine American Music Awards and eleven Grammy Awards. Bruno Mars’s latest album, 24K Magic, arrived in 2016. After coming off his 24K Magic World Tour in 2018, Mars returned to the studio to begin work on his next studio album, slated for release in the coming year.