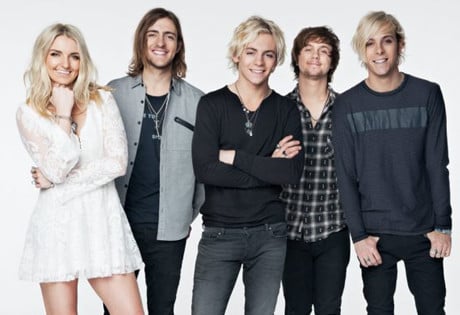 Looking to book R5 entertainment for a wedding anywhere worldwide?

WeddingEntertainment.com makes it easy and trouble-free to check availability and pricing for booking R5 or any act in the business for your wedding. If we don't book an act for you, our service is free. For over 26 years we have booked and produced thousands of events for our clients worldwide. We can also handle everything necessary to produce the show for one all-inclusive price so there are no surprises. Simply fill out an entertainment request form and a booking agent will contact you to discuss the possibility of booking entertainment for your wedding.

The pop rock band known as R5 was established in 2010 by the Lynch family siblings (Rydel, Rocky, Riker, and Ross.) The Lynch family grew up in Littleton, Colorado, and throughout their childhoods all the siblings attended a local performing arts school, learning to sing, dance, and act. After Riker encouraged the entire family to move to Los Angeles, The siblings began to embrace all opportunities for work in entertainment, appearing on the show So You Think You Can Dance in 2009 and creating their own band and starting to perform locally.

Thus R5 was created, and the group began created a YouTube channel and a web-based series called “R5 TV.” The marketing ploy was a huge success, and so R5 became one of the most recent acts to rise to the top through its own viral online marketing plan. R5 released an EP and began performing at every opportunity possible, at a number of county fairs, at Six Flags Magic Mountain, and at the San Diego IndieFest. Eventually, R5 garnered the attention of Hollywood Records and they signed with the label in 2012.

Throughout the rest of the year, R5 worked on material for the EP Loud, which was released in early 2013. The EP spawned the singles “Pass Me By” and “(I Can’t) Forget About You,” and a Europen Tour followed, taking the group to Spain, France, Scotland, Germany, Sweden, Norway, and beyond. Immediately up on their return, R5 re-entered the studio to begin work on their first studio album, and Louder was released in late 2013.

Today, R5 continues the steady climb to success, with additional tours and projects on the horizon for the coming years. Most recently, R5 performed at the Radio Disney Music Awards, at the White House for the annual Easter Egg Roll, and On Air with Ryan Seacrest. The band is slated to appear at the Wango Tango music festival in the near future.