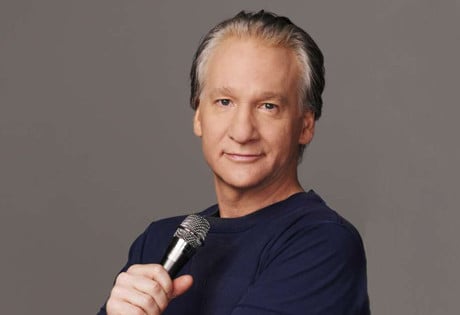 WeddingEntertainment.com makes it easy and trouble-free to check availability and pricing for booking Bill Maher or any act in the business for your wedding. If we don't book an act for you, our service is free. For over 26 years we have booked and produced thousands of events for our clients worldwide. We can also handle everything necessary to produce the show for one all-inclusive price so there are no surprises. Simply fill out an entertainment request form and a booking agent will contact you to discuss the possibility of booking entertainment for your wedding.

Bill Maher was born in 1956 in New York City. He grew up in New Jersey, and attended Cornell University between 1974 and 1978, graduating with a B.A. in English and History. Following graduation, Maher began performing stand-up and started to work as a host at Catch a Rising Star, a New York City comedy club.  Appearances on David Letterman and Johnny Carson in the early 1980’s led to a number of acting roles and eventually brought him to the shows Politically Incorrect with Bill Maher and then Real Time with Bill Maher, the shows with which he is most associated today.

Bill Maher appeared in a number of television and movie roles in the 1980’s, including Sara (1985), Max Headroom (1987), Charlie Hoover (1991), D.C. Cab (1983), Ratboy (1986), Cannibal Women in the Avocado Jungle of Death (1988), and Pizza Man (1991.) In 1993, Comedy Central began running the show Politically Incorrect with Bill Maher, which blended Maher’s comedic talents with his acute awareness of history, current affairs, and politics. The show featured a panel of diverse guests (including authors, actors, news figures, and the like) who would discuss a variety of contemporary subjects. The show was a phenomenal success, earning Emmys and a variety of other awards, and ran on the network until 1997, when the show moved to ABC.

In 2002, during a panel discussion on the topic of the 9/11 attacks, Bill Maher acknowledged some truth to one of his guest’s statements that the terrorists involved in the event could not be easily written off as “cowardly.” Due to the sensitive time period and the freshness of the wounds resulting from the event, audiences, corporate sponsors, and the network alike did not take well to Bill’s statement, and ABC decided against renewing the show for 2002.  While Maher’s bold statement resulted in the show’s cancellation, it also earned him the Los Angeles Press Club’s award for championing free speech, and the show did not disappear; it was modified and moved to HBO under a new title, where it has thrived ever since.

Real Time with Bill Maher is similar to Politically Incorrect, except that Maher has noted that the quality of guests has shifted from the celebrity to the better informed, such as activists, journalists, writers, and political pundits. While topics and statements continue to be controversial, Real Time maintains strong ratings and critical accolades, including multiple Emmy nominations and six Writer’s Guild Awards.  In addition to Real Time, Bill Maher continues to tour frequently, bringing his stand-up to audiences around the nation.  He is also a frequent guest on a variety of news shows, including CNN, MSNBC, The Situation Room with Wolf Blitzer, The Rachel Maddow Show, and Hardball with Chris Matthews. He is a frequent guest on Larry King Live, and since 2005 he has also contributed to the Huffington Post as a blogger.