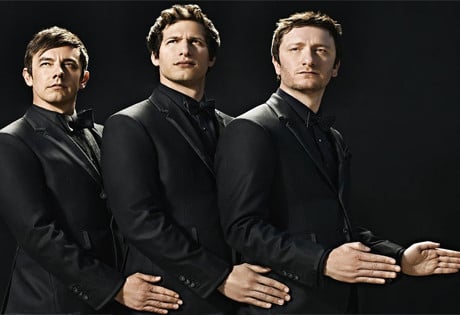 Looking to book The Lonely Island entertainment for a wedding anywhere worldwide?

WeddingEntertainment.com makes it easy and trouble-free to check availability and pricing for booking The Lonely Island or any act in the business for your wedding. If we don't book an act for you, our service is free. For over 26 years we have booked and produced thousands of events for our clients worldwide. We can also handle everything necessary to produce the show for one all-inclusive price so there are no surprises. Simply fill out an entertainment request form and a booking agent will contact you to discuss the possibility of booking entertainment for your wedding.

The American comedy group known as The Lonely Island was established by Jorma Taccone, Andy Samberg, and Akiva Schaffer in Berkeley, California in 2001. The three founding members of the group had been friends while in high school, and after all three had graduated from college, they moved to Los Angeles to begin producing short films. The Lonely Island began producing and uploading various sketches to online forums in 2001, creating a slowly growing buzz and fan base.

Although they struggled for a number of years, eventually their talents caught the attention of Saturday Night Live, and Samberg joined the cast as a regular in 2005. Taccone and Schaffer began work as writers for the show. The Lonely Island presented sketches on Saturday Night Live in a way that deviated from the show’s traditional format. Instead of pitching sketches, they recorded their sketches, eventually making them a sensation not only on the show, but also in the online forum, where many of their videos went viral. Some of their most famous video sketches include: “Dick in a Box,” “I Just Had Sex,” “Like a Boss,” “I’m on a Boat,” and “Jizz in My Pants.”

Since joining Saturday Night Live, The Lonely Island has produced its first feature film, Hot Rod, which was released in 2007. The group has also made the inevitable foray into music, since their sketches usually feature songs and often appear in the “music video” format. The Lonely Island’s first single, “Dick in a Box,” was an immediate hit, but their second hit, “Jizz in My Pants,” actually rose to platinum status in 2008. Since then, The Lonely Island has produced other platinum hits as well, including “I’m on a Boat” (featuring T-Pain) and “I Just Had Sex” (featuring Akon.) The group’s collection of songs can be found on their three albums released so far: Incredibad (2009); Turtleneck & Chain (2011); and The Wack Album (2013.)

We Are Scientists Learn More >