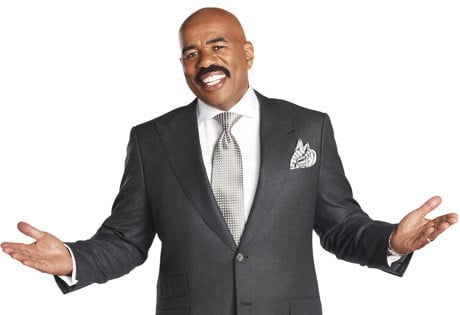 Look no further than WeddingEntertainment.com! We make it easy and stress-free to check availability and pricing for booking Steve Harvey or any other act in the business. With over 26 years of experience in the industry, we have booked and produced thousands of events for clients worldwide.

Steve Harvey was born in 1957 in West Virginia. After attending Kent State and later West Virginia University, he began performing stand-up in the mid 1980’s in Cleveland, Ohio. After winning a number of contests, by the early 1990’s, Steve Harvey was hired to host It’s Showtime at the Apollo. A starring role in Me and the Boys came next in 1994, and then the Steve Harvey Show, which ran until 2002.

Since the mid 1990’s, Steve Harvey has been a constant presence in comedy, touring alongside Bernie Mac, Cedric the Entertainer, and D.L. Hughley as the Kings of Comedy, eventually catching the attention of Spike Lee for the subject of a film by the same name. Harvey has hosted Steve Harvey’s Big Time Challenge, which aired on the WB network until 2005, and he appeared in the films Racing Stripes and the Fighting Temptations. Harvey has also appeared in the films Love Don’t Cost a Thing (2003), Johnson Family Vacation (2004), You Got Served (2004), and Madea Goes to Jail (2009.)

Steve Harvey’s book, Act Like a Lady, Think Like a Man was a smash-hit, and sparked the film Think Like a Man, which was equally successful. The Steve Harvey Morning Show, which aired through Radio One, Inc., has also enjoyed strong ratings.  Currently, Steve Harvey can be seen as the host of the game show Family Feud, a role he accepted in 2010 and which continues today.