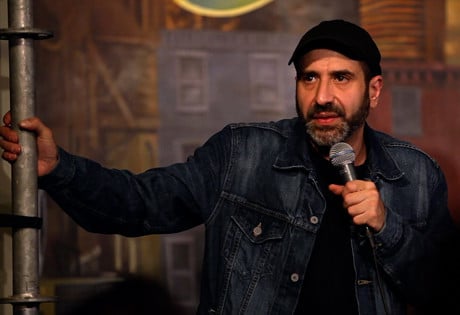 WeddingEntertainment.com makes it easy and trouble-free to check availability and pricing for booking Dave Attell or any act in the business for your wedding. If we don't book an act for you, our service is free. For over 26 years we have booked and produced thousands of events for our clients worldwide. We can also handle everything necessary to produce the show for one all-inclusive price so there are no surprises. Simply fill out an entertainment request form and a booking agent will contact you to discuss the possibility of booking entertainment for your wedding.

Dave Attell was born in 1965 and grew up in Rockville Centre, New York. He graduated in 1987 from New York University and began experimenting with stand-up in the late 1980’s. Although his first attempts at performances were not as successful as he’d hoped, he continued to practice and hone his raft until in 1988 he made his first television appearances on Stand-Up Spotlight, on VH1.

In 1993, Attell made an appearance on The Late Show with David Letterman. As luck would have it, the show’s creator saw the performance and was impressed enough by Attell to offer him a gig as a writer on Saturday Night Live. Dave joined the staff, and also occasionally filled in as an extra to assist the cast, and by the mid-1990’s, he found himself featured on the Young Comedians Special on HBO. His own comedy special on the HBO Comedy Showcase followed, and his relationship with the Comedy Central network was solidified after he appeared on Dr. Katz, Professional Therapist in 1995. By the new millennium, Dave Attell had participated in the Comedy Central Presents series, and the network shortly thereafter signed him to the Daily Show.

On the Daily Show, Dave Attell served as a commentator for the segment “The Ugly American,” contributing to the show for a three-year period. After he left, he appeared on Tough Crowd with Colin Quinn and in the 2007 film, Heckler. In 2008, Attell began hosting the Gong Show with Dave Attell, and he also appeared on episodes of Everybody Loves Raymond, Arrested Development, and Ed.  He also began the show Insomniac with Dave Attell, in which he wanders city streets during the wee hours of the morning and interviews various unsuspecting citizens, sometimes while they are in the middle working a variety of odd jobs. The show was an enormous success, and spawned a series of DVDs: The Best of Insomniac Uncensored, Vol 1 & 2 (2003), and Dave Attell’s Insomniac Tour (2006.)