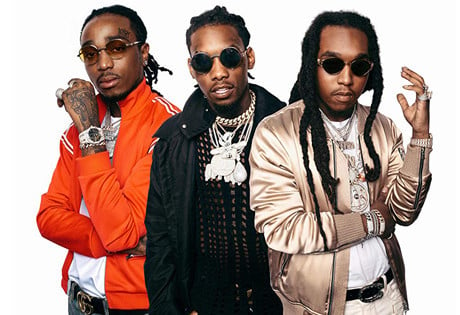 Looking to book Migos entertainment for a wedding anywhere worldwide?

Look no further than WeddingEntertainment.com! We make it easy and stress-free to check availability and pricing for booking Migos or any other act in the business. With over 26 years of experience in the industry, we have booked and produced thousands of events for clients worldwide.

The American hip hop group Migos was established in 2009 by founding members and rappers Offset, Takeoff, and Quavo. The trio grew up together in the Lawrenceville area of Georgia, and all three are related. After spending a few years writing and recording music together, Migos released a debut mixtape, Juug Season, in 2011.

Juug Season earned Migos some attention, and set the stage for the follow-up mixtape, No Label, in 2012. But it was their debut single “Versace,” released in 2013, that became the group’s big breakthrough and the group’s first charting single. The success of “Versace” led to a deal with the Atlantic Records subsidiary 300 Entertainment, and the major label debut album, Yung Rich Nation (2015.)

Since that time, Migos has gone on to release the additional hit singles “Fight Night,” “Look at My Dab,” and the number one hit “Bad and Boujee,” recorded in collaboration with Li Uzi Vert. The single “Fright Night” earned the group a BET Hip Hop Award nomination for Best Club Banger. Other notable singles on which Migos has appeared include: “T-Shirt,” “Congratulations” (with Post Malone); “Slide” (with Frank Ocean): “Want Her” (with DJ Mustard and Quavo); “Go Off” (with Lil Uzi Vert); and “Gucci On My” (with Mike Will Made It.)

Migos recently released their second album, Culture, in 2017. The group has also been nominated for a BET Award for Best Group.