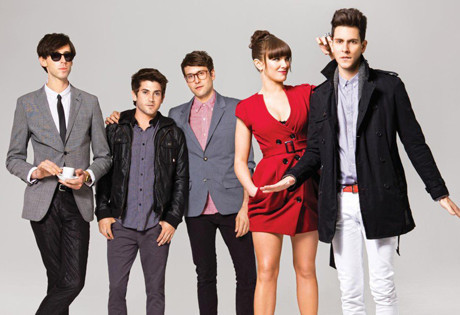 Look no further than WeddingEntertainment.com! We make it easy and stress-free to check availability and pricing for booking Cobra Starship or any other act in the business. With over 26 years of experience in the industry, we have booked and produced thousands of events for clients worldwide.

The dance-pop sensation known as Cobra Starship was established in 2005 in New York City, founded by bass player Gabe Saporta. After beginning the writing process to launch the group, Saporta penned the now infamous “Hollaback Boy” and released the song on his MySpace page. The song earned Saporta not only a significant amount of internet buzz, but the attention of Decaydance Records, to which he signed in the mid 2000’s.

Saporta’s debut was actually a collaboration; he contributed to the song “Snakes on a Plane (Bring It)” for the film of the same name, alongside The Sounds and Gym Class Heroes. As the single was rising the charts, Saporta began seeking other members for what would become Cobra Starship, enlisting guitarist Ryland Blackinton, drummer Nate Novarro, bassist Alex Suarez, and Elisa Schwartz on keytar. With Cobra Starship’s initial lineup now complete, Saporta returned to the writing process, and in 2006, Cobra Starship released its debut album, While the City Sleeps, We Rule the Streets. Cobra Starship launched an extensive tour in 2007, writing new material for a sophomore effort while on the road.

Cobra Starship followed up with the album Viva La Cobra! (2007), a high energy collection of party jams which proved equally successful as Cobra Starship’s debut. Since then, the band has also released Hot Mess (2009) and Night Shades (2011), bringing audiences the singles: “The Church of Hot Addiction,” “Send My Love to the Dancefloor, I’ll See You in Hell (Hey Mister DJ),” “Guilty Pleasure,” “The City Is at War,” “ Kiss My Sass,” “Good Girls Go Bad,” “Hot Mess,” “Living in the Sky with Diamonds,” “Wet Hot American Summer,” “You Make Me Feel…,” “Middle Finger,” and “#1Nite (One Night.)”

Cobra Starship is just getting started. With the current lineup of Victoria Asher, Ryland Blackinton, Nate Navarro, Gabe Saporta, and Alex Suarez, the band continues to perform, record, and tour.