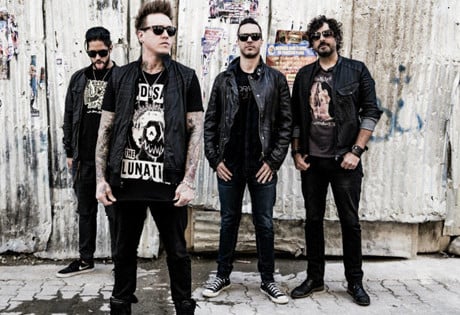 WeddingEntertainment.com makes it easy and trouble-free to check availability and pricing for booking Papa Roach or any act in the business for your wedding. If we don't book an act for you, our service is free. For over 26 years we have booked and produced thousands of events for our clients worldwide. We can also handle everything necessary to produce the show for one all-inclusive price so there are no surprises. Simply fill out an entertainment request form and a booking agent will contact you to discuss the possibility of booking entertainment for your wedding.

The rock band Papa Roach originated in California around the turn of the millennium, although its origins go back to the early 1990’s, when Dave Buckner and Jacoby Shaddix met while still in high school. After sparking a friendship and discovering their similar interests in music, the two teamed up with other musicians and decided to form a band. Papa Roach’s debut EP, Potatoes for Christmas, was released in 1994, followed by their self-produced full-length debut, Old Friends From Young Years (1997), but it was their major label debut, Infest, which brought Papa Roach to fame after signing with DreamWorks Records in 1999.

Papa Roach followed up their success with the albums Lovehatetragedy (2002), Getting Away with Murder (2004), The Paramour Sessions (2006), and Metamorphosis (2009), spawning the hit alternative singles “Last Resort,” “Broken Home,” “Between Angels and Insects,” “She Loves Me Not,” “Getting Away with Murder,” “Scars,” “Forever,” “Lifeline,” “Kick in the Teeth,” and “Burn.” Papa Roach’s extensive touring history includes performances with Ozzfest and alongside such notable alternative and rock bands such as Trust Company, 311, Dead Poetic, and Unwritten Law.

Although Dave Buckner left the band in recent years, Papa Roach has continued to perform, tour, and record with the current lineup of Shaddix, Jerry Horton, Tobin Esperance, and Tony Palermo. Papa Roach’s most recent album, The Connection, arrived in 2012.