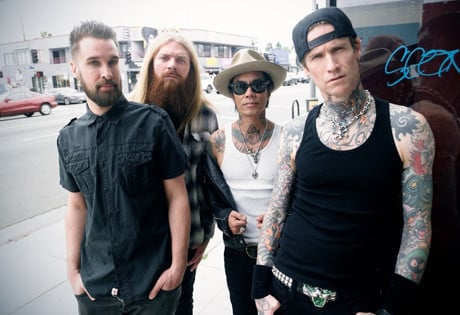 Looking to book Buckcherry entertainment for a wedding anywhere worldwide?

WeddingEntertainment.com makes it easy and trouble-free to check availability and pricing for booking Buckcherry or any act in the business for your wedding. If we don't book an act for you, our service is free. For over 26 years we have booked and produced thousands of events for our clients worldwide. We can also handle everything necessary to produce the show for one all-inclusive price so there are no surprises. Simply fill out an entertainment request form and a booking agent will contact you to discuss the possibility of booking entertainment for your wedding.

Buckcherry was formed in 1995 in Los Angeles, California, by members Josh Todd, Keith Nelson, Jonathan Brightman, and Devon Glenn. Initially called Sparrow, Buckcherry began performing around the local Hollywood area, and eventually caught the attention of DreamWorks Records, which saw potential in their traditional rock and roll style. Buckcherry’s self-titled debut album was received with critical acclaim upon its release in 1999 and gave audiences the hit singles “Dead Again,” “For the Movies,” “Check Your Head,” and “ Lit Up.”

Although the album Time Bomb followed in 2001, Buckcherry disbanded in 2002, until three years later when Josh Todd and Keith Nelson decided to revive the group with a new album, 15, released in 2006. The album was a smash hit, even more successful than Buckcherry’s debut, spawning the top ten hits “Sorry” and “Crazy Bitch,” and the additional singles “Next 2 You” and “Everything.” The albums Black Butterfly (2008), All Night Long (2010), Confessions (2013), and Rock ‘n’ Roll (2015) followed, giving audiences the singles “Too Drunk…,” “Resuce Me,” “Talk to Me,” “All Night Long,” “Dead,” “It’s a Party,” “Bring it On Back,” and “The Feeling Never Dies.” The band also provided the song “Wherever I Go” for Avengers Assemble, the soundtrack to accompany the Avengers film.

Buckcherry continues to perform, tour, and record with the current lineup of Todd, Stevie D., Kelly LeMieux, and Kevin Roentgen. The band re-entered the studio in late 2018 to prepare for their latest studio album, Warpaint, released in 2019.