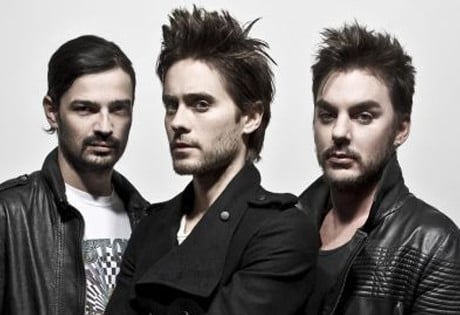 Looking to book 30 Seconds To Mars entertainment for a wedding anywhere worldwide?

BookingEntertainment.com makes it easy and trouble-free to check availability and pricing for booking 30 Seconds To Mars or any act in the business for your wedding. If we don't book an act for you, our service is free. For over 25 years we have booked and produced thousands of events for our clients worldwide. We can also handle everything necessary to produce the show for one all-inclusive price so there are no surprises. Simply fill out an entertainment request form and a booking agent will contact you to discuss the possibility of booking entertainment for your wedding.

30 Seconds to Mars was created in the late 1990’s, founded by actor Jared Leto. The band came together originally as a project and musical outlet for brothers Jared and Shannon Leto, and with the additional of Matt Wachter and then Tomo Milicevic, 30 Seconds to Mars established the band’s initial lineup and released their eponymous debut album in 2002.

30 Seconds to Mars launched the singles “Edge of the Earth” and “Capricorn (A Brand New Name)” and received strong reviews and critical acclaim for its alternative sound which features an infusion of neo-progressive, hard rock, synthrock, and post-grunge. The band’s debut was followed by the equally successful albums A Beautiful Lie (2005) and This Is War (2009), the former of which rose to platinum status. The albums spawned the singles “Attack,” “The Kill,” “From Yesterday,” “A Beautiful Lie,” “Kings and Queens,” “This is War,” “Closer to the Edge,” and “Hurricane 2.0,” the latter of which features vocals contributed by Kanye West.

30 Seconds to Mars has, so far in its first decade, earned the MTV2 Award for one of its first singles, “The Kill,” and is currently listed in the Guinness Book of World Records as the rock band with the “Longest Concert Tour,” having performed more than three hundred concerts over an approximate two year span. The band embraces a commitment to environmental sustainability, and during their 2006 Welcome to the Universe tour, 30 Seconds to Mars focused on keeping the tour as environmentally friendly as possible, fueling their tour buses with vegetable oil and focusing on sustainable choices during their performances.

Between 2011 and 2013, 30 Seconds to Mars found the band embroiled in a legal battle over the release of their album, Love, Lust, Faith and Dreams. Their struggle with EMI resulted in the documentary film Artifact (2012), and in 2013, the album released through Universal. It was well received critically and commercially.

With the current lineup of Jared Leto, Shannon Leto, and Tomo Milicevic, 30 Seconds to Mars continues a career on the upswing. The band most recently released the album Love, Lust, Faith and Dreams, featuring the singles “Up in the Air” and “Conquistador,” in 2013. Thus far, 30 Seconds to Mars has sold more than ten million albums worldwide. The band recently signed to Interscope Records and entered the studio to prepare for their next studio album. The band’s latest single, “Walk on Water,” was released in advance of the album, expect to drop sometime in early 2018.