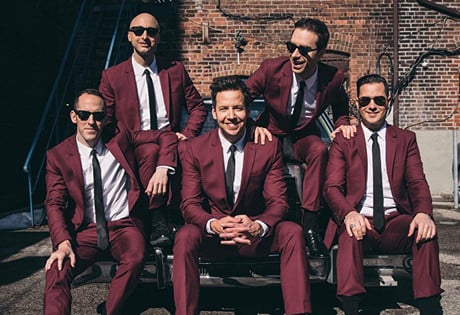 WeddingEntertainment.com makes it easy and trouble-free to check availability and pricing for booking Simple Plan or any act in the business for your wedding. If we don't book an act for you, our service is free. For over 26 years we have booked and produced thousands of events for our clients worldwide. We can also handle everything necessary to produce the show for one all-inclusive price so there are no surprises. Simply fill out an entertainment request form and a booking agent will contact you to discuss the possibility of booking entertainment for your wedding.

The pop band Simple Plan was founded in Montreal, Quebec, established in 1993 by founding members Chuck Comeau, David Desrosiers, Sebastien Lefebvre, Jeff Stinco, and Pierre Bouvier. Simple Plan’s debut album, No Pads, No Helmets… Just Balls, was released in 2002 and with the assistance of a massive tour, eventually reached the top of the alternative charts. Eventually, the album sold over four million copies worldwide, launching Simple Plan as a chart-topping pop alternative band.

Since 2002, Simple Plan has released the albums Still Not Getting Any… (2004), Simple Plan (2008), and Get Your Heart On! (2011), spawning the hit singles: “Perfect,” “Welcome to My Life,” “Shut Up!,” “Untitled (How Could this Happen to Me?),” “Crazy,” “When I’m Gone,” “Jet Lag,” and “Summer Paradise.” In addition to focusing on music, the band has established the Simple Plan Foundation to provide funds to a variety of non profit groups, including The Make-A-Wish Foundation, MADD, RAAADD, the Children’s Wish Foundation, War Child Canada, and Kids Help Phone. Simple Plan has also raised funds to assist in relief efforts following the earthquake in Japan, and headlined an MTV concert to raise awareness about modern slavery and human trafficking. The book Simple Plan: The Official Story was also published in 2012 with all profits going straight to the foundation to further their efforts.

Simple Plan continues to perform and record with exactly the same lineup which began the group in 1993. The band has announced plans to return to the studio to prepare for their next studio release, set for 2013 or 2014.