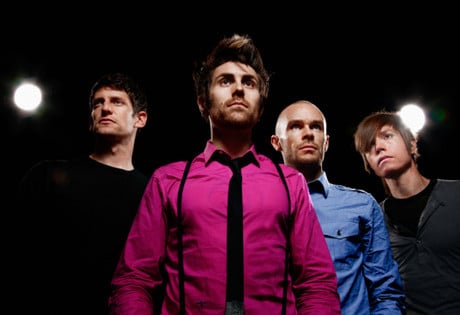 Looking to book AFI entertainment for a wedding anywhere worldwide?

WeddingEntertainment.com makes it easy and trouble-free to check availability and pricing for booking AFI or any act in the business for your wedding. If we don't book an act for you, our service is free. For over 26 years we have booked and produced thousands of events for our clients worldwide. We can also handle everything necessary to produce the show for one all-inclusive price so there are no surprises. Simply fill out an entertainment request form and a booking agent will contact you to discuss the possibility of booking entertainment for your wedding.

The American alternative/punk-rock band known as AFI (A Fire Inside) was established in the early 1990’s, by founding members Vic Chalker, Mark Stopholese and Davey Havok. The two musicians met while they were still in high school and began performing together under the name A Fire Inside. Although Chalker left the band early in its inception, to be replaced by Geoff Kresge, AFI performed for a few years until the members graduated from high school and went to college, scattering around the country.

A reunion performance in 1993 at the Phoenix Theater in California brought the members back together and they decided to reinstate the band and pursue a full-time career as musicians. AFI released Answer That and Stay Fashionable, their debut album, in 1995. The album was moderately successful, spawning the singles “I Wanna Get a Mohawk (But Mom Won’t Let Me Get One),” “Cereal Wars,” and “Nyquil.” AFI’s humorous lyrics and unconventional themes made the band a quick underground favorite, and after signing to Nitro Records, they returned to the studio to record a second album.

Very Proud of Ya arrived in 1996, followed by Shut Your Mouth and Open Your Eyes (1997) and Black Sails in the Sunset (1999.) AFI continued to experience moderate success, but enjoyed its biggest breakthrough with The Art of Drowning, which arrived in 2000. Art of Drowning was followed by Sing the Sorrow (2003), which was even more successful, and then: Decemberunderground (2006), and Crash Love (2009.) Collectively, the albums spawned the alternative hits: “Girl’s Not Grey,” “The Leaving Song Pt. II,” “Silver and cold,” “Miss Murder,” “Love Like Winter,” “The Missing Flame,” “Medicate,” “Beautiful Thieves,” “I Hope You Suffer,” and “17 Crimes,” which was featured in the film The Mortal Instruments: City of Bones.

AFI continues to perform and record with the current lineup of: Davey Havok, Jade Puget, Hunter Burgan, and Adam Carson. The band has grown to be known for its post-hardcore style which borders on the genre of “horror punk.” AFI most recently released the album Burials, which arrived in 2013.