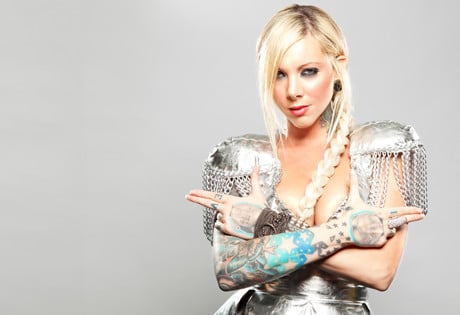 Looking to book In This Moment entertainment for a wedding anywhere worldwide?

WeddingEntertainment.com makes it easy and trouble-free to check availability and pricing for booking In This Moment or any act in the business for your wedding. If we don't book an act for you, our service is free. For over 26 years we have booked and produced thousands of events for our clients worldwide. We can also handle everything necessary to produce the show for one all-inclusive price so there are no surprises. Simply fill out an entertainment request form and a booking agent will contact you to discuss the possibility of booking entertainment for your wedding.

In This Moment FAQs

In This Moment Biography

In This Moment Biography

The heavy metal band In This Moment was founded in 2005 by guitarist Chris Howorth and singer Maria Brink. After adding two guitarists to the lineup, In This Moment began writing and recording music to post to MySpace. It wasn’t long before Century Media Records took notice of the band and signed them to their first record deal.

In This Moment released its debut album, Beautiful Tragedy, in 2007. In part on the strength of the singles "Beautiful Tragedy" and "Prayers," the album was a success, blending Brick’s unique lyrical style with traditional sounds of hard rock and metalcore. Performances alongside such heavy-hitters as Megadeth and Ozzy Osbourne followed, and In This Moment began to expand an ever-growing fan base.

The Dream, In This Moment’s sophomore effort, fared even better, debuting on the Billboard mainstream charts at number seventy-three. An extensive touring schedule followed for 2009, and In This Moment finally launched their own headlining tour alongside supporting acts Motionless in White and In Fear and Faithful. Two more albums have since followed: A Star-Crossed Wasteland (2010) and Blood (2012), spawning the top forty rock hits "The Promise," "Blood," "Adrenalize," and "Whore."

Right now, In This Moment is enjoying its status as a band on the rise. Current members Maria Brink, Chris Howorth, Tom Hane, Travis Johnson, and Randy Weitzel recently performed at the Uproar Festival and the ShipRocked music cruise in 2012, and opened for Halestorm on tour later that same year. In this Moment also headlined the Hellpop Tour in 2013, with a continuation of the tour scheduled for 2014. In This Moment’s most recent album is Blood at the Orpheum, released in early 2014.