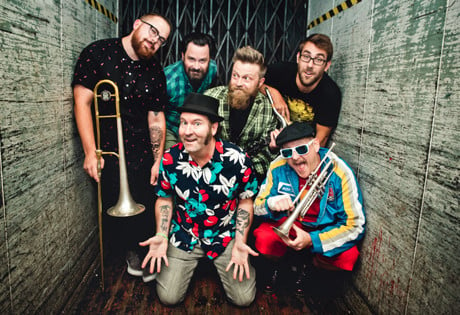 WeddingEntertainment.com makes it easy and trouble-free to check availability and pricing for booking Reel Big Fish or any act in the business for your wedding. If we don't book an act for you, our service is free. For over 26 years we have booked and produced thousands of events for our clients worldwide. We can also handle everything necessary to produce the show for one all-inclusive price so there are no surprises. Simply fill out an entertainment request form and a booking agent will contact you to discuss the possibility of booking entertainment for your wedding.

The ska punk band Reel Big Fish was established in the early 1990’s. The band’s debut album, Everything Sucks, was released in 1992 and garnered Reel Big Fish the interest of a number of record labels. Eventually, the band signed with Mojo Records and four years later released their major label debut, Turn the Radio Off.

The album spawned the hit single “Sell Out,” and paved the way for the follow-up album, Why Do They Rock So Hard? (1998.) Since that time, the band has released an additional five albums, despite switching to Jive Records and then leaving that label in the last few years: Cheer Up! (2002), We’re Not Happy ‘Til You’re Not Happy (2005), Monkeys for Nothin’ and the Chimps for Free (2007), Fame, Fortune and Fornication (2009), and Candy Coated Fury (2012.) Over the years Reel Big Fish has also experienced multiple changes to the lineup, but the band continues to perform and record with current members Aaron Barrett, Dan Regan, Ryland Steen, Derek Gibbs, John Christianson, and Matt Appleton.

Reel Big Fish has become a punk favorite on the touring circuit, most recently having delighted fans on the Warped Tour 2013. The band has dates booked for a variety of venues, including a Caribbean cruise, for 2014.