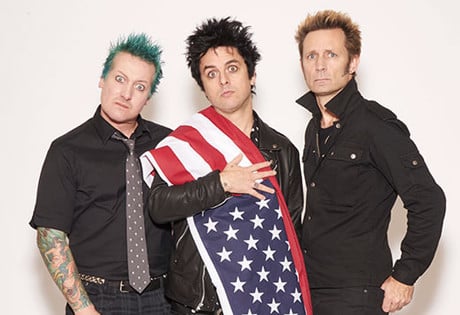 WeddingEntertainment.com makes it easy and trouble-free to check availability and pricing for booking Green Day or any act in the business for your wedding. If we don't book an act for you, our service is free. For over 26 years we have booked and produced thousands of events for our clients worldwide. We can also handle everything necessary to produce the show for one all-inclusive price so there are no surprises. Simply fill out an entertainment request form and a booking agent will contact you to discuss the possibility of booking entertainment for your wedding.

The punk rock band Green Day was established in the late 1980’s in Berkeley, California. Mike Dirnt and Billie Joe Armstrong were performing together in the band Sweet Children, and a performance one evening caught the attention of the owner of Lookout! Records, who offered the band a record deal. The studio album 39/Smooth was released in 1990 and within a few years, Green Day began to experience some moderate underground success.

However, Green Day’s big breakthrough came after switching to Reprise Records and releasing the album Dookie in 1994. The album rocketed to the top of the charts, in part on the strength of the videos for the singles “Basket Case,” “Longview,” and the smash hit “When I come Around.” All three reached the number one spot on the rock charts and the album won the Grammy for Best Alternative Album that year, firmly establishing Green Day as superstars of punk and alternative rock.

With the current lineup of Armstrong, Dirnt, Tre Cool, and Jason White, Green Day continues to tour, record, and perform. The band has sold over seventy-five million albums and earned Grammys in the categories of Best Rock Album, Best Alternative Album, and Record of the Year. In addition, a musical adaptation of the album American Idiot has earned Green Day a Grammy for Best Musical Show Album and multiple Tony nominations.

Most recently, Green Day released the album trilogy Uno!, Dos!, Tre! and embarked on a summer tour in its support, performing a numerous festivals in Europe, including the Reading Festival in the U.K. and the Rock en Seine festival in France. The documentary film Broadway Idiot, chronicling the making of the musical American Idiot, is also currently in the works.