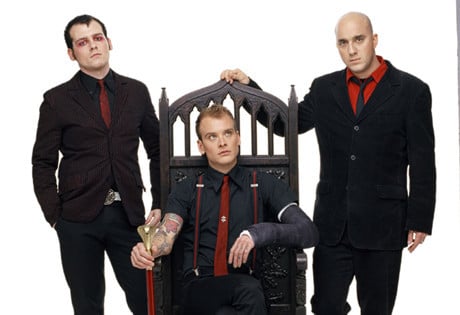 WeddingEntertainment.com makes it easy and trouble-free to check availability and pricing for booking Alkaline Trio or any act in the business for your wedding. If we don't book an act for you, our service is free. For over 26 years we have booked and produced thousands of events for our clients worldwide. We can also handle everything necessary to produce the show for one all-inclusive price so there are no surprises. Simply fill out an entertainment request form and a booking agent will contact you to discuss the possibility of booking entertainment for your wedding.

The punk rock band Alkaline Trio was formed in the Chicago suburbs in 1996, by founding members Rob Doran, Glen Porter, and Matt Skiba. After teaming up with Asian Man Records, Alkaline Trio released two EPs, Sundials (1997) and For Your Lungs Only (1998), before releasing their full-length debut, Goddamnit, in 2000.

Goddamnit was a moderate hit in the United States, as was the follow-up, Maybe I’ll Catch Fire (also 2000), but Alkaline Trio found itself with greater success overseas, most notably in the United Kingdom, where the band continually charted both albums and singles for the next ten years. The releases From Here to Infirmary (2001), Good Mourning (2003), Crimson (2005), Agony & Irony (2008), The Addiction (2010), and My Shame Is True (2013) spawned the top forty UK singles: “Stupid Kid,” “Time to Waste,” “Mercy Me,” “Burn,” and “Help Me,” which also found its way into the top twenty in the United States.

Although Alkaline Trio has undergone numerous record label switches, and members Rob Doran and Glen Porter left the band in its earlier years, Alkaline Trio continues to perform and record with the current lineup of Matt Skiba (guitar and lead vocals); Dan Andriano (bass and vocals); and Derek Grant (drums and vocals.) Alkaline Trio recently announced that they are preparing for their nineth studio album, scheduled for release sometime in early 2018