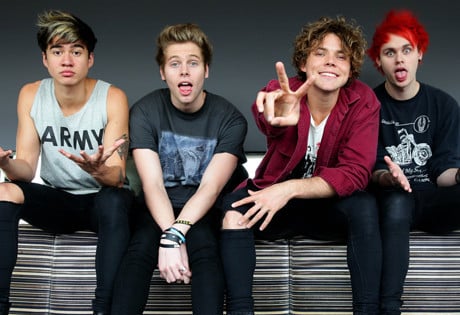 Looking to book 5 Seconds Of Summer entertainment for a wedding anywhere worldwide?

WeddingEntertainment.com makes it easy and trouble-free to check availability and pricing for booking 5 Seconds Of Summer or any act in the business for your wedding. If we don't book an act for you, our service is free. For over 26 years we have booked and produced thousands of events for our clients worldwide. We can also handle everything necessary to produce the show for one all-inclusive price so there are no surprises. Simply fill out an entertainment request form and a booking agent will contact you to discuss the possibility of booking entertainment for your wedding.

The Australian pop rock group known as 5 Seconds of Summer was established in 2011, founded by members Ashton Irwin, Calum Hood, Michael Clifford, and Luke Hemmings. Drawing from the influences of bands such as Green Day, Blink-182, and All Time Low, 5 Seconds of Summer formed in Sydney while the members were attending Norwest Christian College together. The group began performing around the local area and recording their gigs, uploading the videos to YouTube.

It wasn’t long before the YouTube channel began to establish a following, garnering interest from fans and industry alike. 5 Seconds of Summer settled on a publishing deal with Sony ATV Music, but the band initially continued to rely on self-propelled social media to further increase their fan base instead of seeking a major label deal right away. The payoff worked; 5 Seconds of Summer’s debut EP, Unplugged, reached into the top 5 on the Australian iTunes chart, and the group received further support from fellow artists such as One Direction, which publicly endorsed the band and brought them along as their opening act for their 2013 tour.

It was this exposure that finally brought 5 Seconds of Summer to the market in the United States, ultimately earning them a record deal with Capitol Records. With the current hits “She Looks So Perfect” and “Wherever You Are,” 5 Seconds of Summer has already earned awards for Breakthrough Band (MTV) and Aussies’ Fave Hot New Talent (Nickelodeon Kids’ Choice Awards), in addition to nominations from the World Music Awards.

5 Seconds of Summer has recently entered the studio to complete work on their self-titled major label debut, set for release this year.